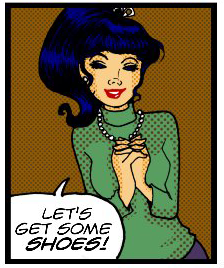 I Was Kidnapped by Lesbian Pirates From Outer Space!!! #4

This issues has my favorite thing ever in it: Shoe Shopping! I’m a little obsessed with shoes and I might overly identify with Susie who’s just heartbroken to realize that she can’t fit all the shoes on the ship. I have the same problem with my shoe rack, which has made my shoes move into my closet as well.

Okay, Susie is a little shell shocked still from her kidnapping, and she’s still being a little ditsy. And having gay panic over her “newly” discovered feelings. Specifically how much she’s in love with the Captain.

Marge and Velma drinking together is hilarious. There should be more issues with drinking and karaoke. Maybe then Susie can confess her love to the Captain. Even when she’s so sad that the Captain is chasing a straight woman, Sally Speed the fastest pilot in the galaxy. Which the Captain’s unrelenting chase the object of her affection really shows how in her world, all the women are lesbians or at least bisexual. Which really would make my dating life better too.

And we have another filler…

Okay, seriously, we know that Captain Marvel is struggling with his Skrull identity vs. his fake Kree identity. This is not new, and since really this issue told us nothing new or interesting about Captain Marvel’s situation or about the Skrull’s plans, boring.

Seriously, Bendis, it’s okay to admit that you’re overworked and bit off more than you can chew and that you can hire someone like me to fill in the blanks. 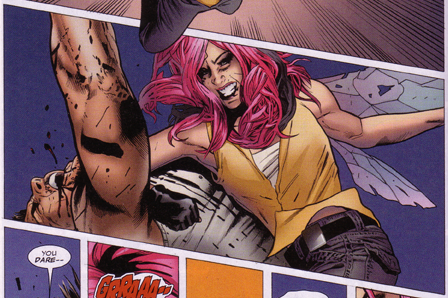 I so called that it was Madelyn Prior. (Actually, my second guess was Adriana, but I guess it’s time for Scott to have another angst round. Hey, maybe they can bring back Cable and the baby and there can be some emo crying about how Cable never really got to know his dad’s ex-wife who’s was retconned to be a clone of Jean Grey, his mother. Or you know Jean Grey from an alternative universe. Maybe Cable Jesus can figure this all out for us and draw us a map of the Summers’ family while he’s at it.)

Okay, and I get being pissed to find that while your husband left you and your child for his not-dead-lover, but haven’t we hashed out the Emma-being-hated-by-Scott’s-exes-and-them-stealing-him-away already? I really hope this is not where this comic is going. Mostly because I except more from his dynamic writing duo.

Pixie was fantabulous in this issue. I loved how she got over her issues about being almost beaten to death and feeling like quitting by kicking the shit out of Empath before Wolverine could get there. Pixie is fast becoming one of my favorite characters. She’s way more interesting than Cyclops. (Sorry, Cyclops fans.)

I really wish that someone besides Greg Land was doing the art. You can’t tell the characters apart. While it’s helpful for new readers to see the little labels next to the characters. (Or heck even comic book geeks like me don’t remember every X-Man.) However, it would also be extremely helpful if there was an artist who could render them to have different faces. 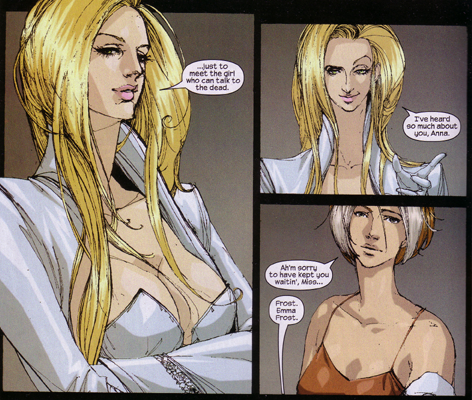 Okay, not a new comic, it came out in 2006, but something I picked up this week at the used bookstore. Mostly because I’ve been enjoying the Avengers’ versions of these. This one is, however, a little weird.

This folk tale is based on an amalgamation of Cajun Voodoo stories. Of course, Cajun Voodoo requires Rogue and Gambit falling in love with Mystique, Bishop, Emma Frost, and the rest of the Hellfire Club serving as cast. The story itself is kind of run-of-the-mill, Rogue can contact the dead and Emma wants to use her to control the dead for an army of zombies for the Hellfire Club and played the characters of rather trope-y with no real explorations of characterization insight. It needs to be a lot longer than one comic to fill the story out.

It’s kind of sleazy how there’s this set-up for how you don’t really know what Rogue’s doing and you might think she’s a prostitute given that she has a “client” waiting for her.

The worst thing about this comic is the art. Kei Kobayashi draws a horrendous Gambit and gives Emma Frost a neck longer than a giraffe’s. She also does this with several other of the characters, though it’s more noticed with Emma’s long up-turned coat collar. It’s one thing to be manga-influenced and another to make beautiful characters ugly. And Mystique is just made out into a stereotype of a mad Voodoo momma. Rogue and Bishop are really the only characters drawn well.