This week was a light week, just The New Avengers #46 by Brian Michael Bendis and Echo #7 by Terry Moore. Spoilers ahead… 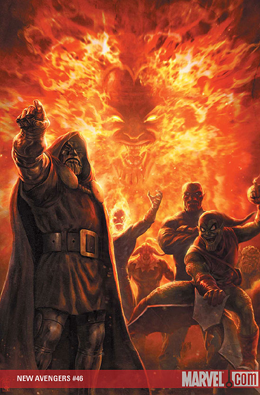 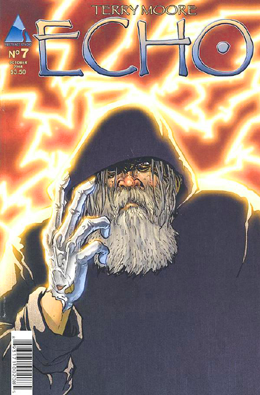 This cover makes zero sense with the storyline, which has been a big issue for the past several New Avengers issues. (Besides Bendis being completely sidelined and overtaken by his pet project taken main stage of Secret Invasion.) However, none of the characters featured on the cover are even in the story. Though all those Skrulled-up characters are villains and #46 is about villains, specifically the Red Hood and Madame Masque and how they find out that Skrulls are invading.

Madame Masque is capture by S.H.I.E.L.D. and when Red Hood comes to rescue her. He starts killing all the agents and before he kills the last one, Madame Masque stops him as all the dead bodies have returned to their Skrull forms.

It’s revealed the Red Hood’s gang really hasn’t been infiltrated yet, and the Skrulls were planning on switching out Madame Masque, but obviously failed. This does keep in line with the Skrulls having slightly outdated information about Earth and not knowing new groups, who’s dead, or who’s been born since their capture and interrogation of the Illuminati. Also the Red Hood, like Dr. Strange, can see who’s a Skrull and who’s not. Though this actually seems more easy for him, perhaps because Dr. Strange was part of the closely studied Illuminati.

I really like how Madame Masque and the Red Hood work together and hope Bendis keeps them going strong when they go against the New Avengers, which will happen.

The other big reveal is that Dormammu, the Avenger villain and Dr. Strange nemesis, is the one whose power is behind the Red Hood.

Julie and Dillon are still on the run. Actually, they’ve stopped to rest for a while, and this is the issue where they learn that the government or the corporations or whoever is after them really isn’t going to stop until they find them.

But seriously, hasn’t Dillon watched any good movies about losing one’s identity? You ditch the cell phone that’s registered under your name.

I’m interested in seeing what will happen in the next issue and just who eviscerated everyone at the hotel.