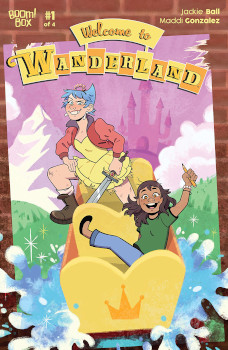 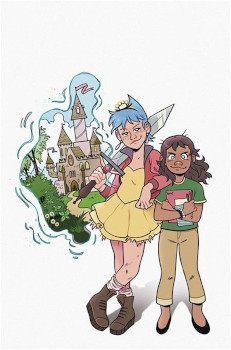 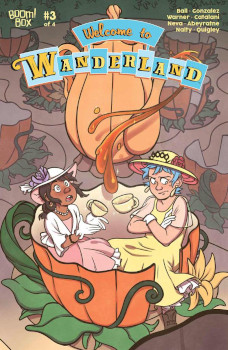 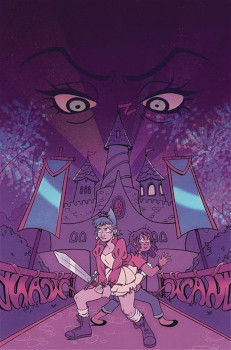 This is a cute imagining, but it’s not extraordinarily pulling me in. The premise is that the theme park Wanderland Park is in disrepair, but Bel is obsessed with finding the secret of the park and the promised magic. Her brother Michael plays one of the princesses in the park, so she spends a lot of time there.

Bel opens a staff-only door and finds herself in a magical land. The land that Wanderland is based on. Of course, quickly, the portal closes up, and she’s dragged off to the nearby castle under capture for her seemingly magical powers. Everyone believes Bel to be a mage since she opened the portal.

This issue’s tone is a light, action-y adventure book, which I appreciate. Even when captured, Bel doesn’t seem like she’s in any real trouble or danger. Especially since Riot swiftly rescues her, Riot being a princess who’s decided the princess life isn’t for her.

Their mission is, of course, to find the portal so Bel can go back to her world. But there is a mysterious figure following them.

The art follows in the fun style. The dilapidated theme park was extremely detailed and probably my favorite part since the pristine Wanderland world is too clean. Except Riot’s costuming. It’s joyous to see her ripped princess dress for action movement, plus short hair and hiking boots. Especially in contrast with the femme and delicate version of Michael’s Princess Lark Medowstone back in the park.

It is bad that I only want to see Riot and Bel hang out in the park more than Wanderland? They seem to have much more fun together. It’s also the first time where it becomes obvious that Riot is not much older than Bel. There’s kind of a hand-wavey age thing happening where both of them seem to be young teens. It’s also clear that Bel hasn’t had very many friends, outside of her brother, who is also her brother.

Of course, I also adore the bits about Margot. I mean, queer romance for sure, but also the cuteness of the princess and the pirate. When Riot pulls down her hoodie over her face in embarrassment, it was a perfect display of teen crushes and of not knowing how to handle those feelings.

Michael is a good brother. He was so angry in that perfect way that showed how much he cares for Bel. Also, it sets a framework for how long they can spend inside Wanderland. I assume, at some point, they might find it a bit harder to get in and out.

Riot freaking out over Michael as Princess Lark Medowstone was so cute. Same with Riot getting all excited about school. Though completely unrealistic that a teacher or other administrator wouldn’t want to know more about who this random new kid is. Schools these days are on much higher alert for people who don’t belong, even if those people are children, and Riot would definitely stand out with her blue hair and big personality.

Throwing your phone is always a bad idea.

Madam Stump’s twist was pretty great. And this was the first time in Wanderland where I’ve very much enjoyed it, and we get why the girls might hang out there. The two Crystal Falls comparison were pretty sweet.

This book’s been pretty great about pacing. However, not introducing Borta Norling until the second to the last issue isn’t working for me. Especially since all his secrets and Syla making him her slave mage all also happen in this issue.

Plus, the addition of introducing Sebastian; who even if he is stripped of some royal powers and maybe some of the magic of Wanderland by not being king, he will still be a formidable ally in defeating Syla.

The moments that do work for me so well were Bel and Riot getting into a fight over Bel’s distracted attention and then Norling turning her metal bracelet (made by Bel as a birthday present) into a Molly Mongoose figure. It felt like those moments you have with your friends who you are close to — and as someone who’s queer and once was a teen, maybe those you also have a crush on too.

The second moment was Bel and Michael in the house. There’s a handwave around time here, and Michael isn’t worried about when Bel doesn’t show up at home. (Though it also sounds like maybe Bel and Riot spend a lot of nights at Bel and Michael’s house.) Their conversation about Bel and Riot’s friendship troubles was sweet and caring.

The wrap-up has a short-and-sweet path once they take down Syla after Bel levels up her magic. Clearly, after that, they’ll redo the park and make it something better, including reuniting Norling with his daughter and getting her back company control.

While it’s certainly disappointing to have an artist change on the last issue of a four-issue miniseries, Rose’s art stayed true to the story. It felt appropriate for tone, setting, and the targeted young adult reading group.

I do wonder what happened to Michael’s assertion that Bel had a crush on Riot, especially as Riot ends up with Margot. I do love Bel and Riot’s friendship more than a possible romance, but it made that moment seem like a sharp turn from the last issue. Not that Bel was going on and on about being in love with her, or anything like that.

The subtly that Ball used to show Sebastian is a trans man was great, especially since it then implied a matriarch-rule in the country. I also liked Sebastian explaining more about the numbers. Even if it doesn’t make sense that Riot’s number could go below how many siblings she has. Sebastian indeed came across as a good man, even if I’m skeptical of any royalty are great rulers storyline. (We’re just going to have to buy that narrative for the moment.)

Bel telling Michael everything, and him realizing he would need to process it later was quite funny.

I am a little sad that we didn’t get to see Norling reunite with his daughter, and the reason why he couldn’t make a door — because his daughter was supposed to go through — felt like an interesting, but dropped thread. It did all worked.

Syla’s ending also felt too short. I suppose, at this point, we were just supposed to trust Sebastian and his wisdom.

How Ball wound the story around for Bel to consider the changes she’d made to the park and its more significant impact was excellent. It was thoughtful storytelling to see Bel change from her being right about all improvements via magic, and then thoughtfully considering them. I did find Bel’s joke about her online troll to be quite hilarious.

Overall, the ending seemed very fitting in that Bel would be able to explore the other parts of Wanderland, as long as she did her homework. This was a pretty fun miniseries, and I wouldn’t mind reading more about this world.