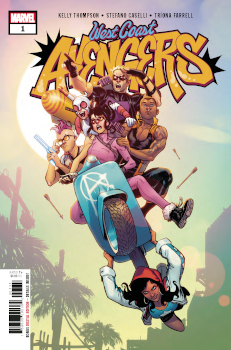 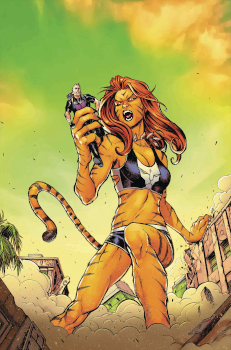 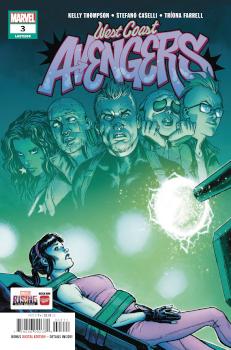 The land sharks won me over. I’m delighted there’s going to be a continuation of Kate’s Hawkeye tales in Los Angeles. Plus, this plays on all the jokes about the Marvel universe being centered on New York City, and there’s the legacy of the West Coast Avengers.

What I don’t know about is Clint hanging around. I don’t know if this is a choice by Thompson, or if Marvel believes we need Clint to sell single issues. (I’m sure the Hawkeye trades sell higher than the singles, but we know Marvel loves their Diamond single issue sales reports.)

Quire is boring. And I’m not sure if the reality TV show being made about him makes him any more interesting. Only that it’s very LA. This is also a technique that Thompson used in her Jem and the Holograms books in order to humanize and bring together two “warring” bands. Though I did love all the gags that Caselli drew in the backgrounds of the TV confessional scenes.

Thompson seems to be collecting fan-favorite characters like Gwenpool and America. This book knows it’s audience very well, and I’m definitely in it.

Johnny is a great boyfriend, and I hope we get to know him much better. Especially about his decisions to become a superhero.

I don’t know what I think about giant Tigra and B.R.O.D.O.K. The latter also seems a bit larger than he should be for someone human-sized. Not sure if the perspective was just off due to the ocean horizon.

This book is chaotic if nothing else. And Quire and Gwenpool hooking up is pretty gross and somewhat formulaic. Even if we get the reactions around everyone else being grossed out about it.

It’s not like we didn’t expect B.R.O.D.O.K. to be anything but evil. The jokes around him also didn’t seem as sharp as they should’ve been. I’m not one for esoteric indie movie jokes, but I did catch the Buffy the Vampire Slayer reference.

Giant Tigra is back to become the stomping lady of Los Angeles. Plus, where did she go when she walked into the ocean? It seems like maybe one of those flying superheroes should’ve tracked her, even if they were able to track down B.R.O.D.O.K.’s lab quickly.

There does still need to be some justification as to why some of these characters are staying around to be part of the team.

These are fun comic books, but I’m hoping for more. Thompson’s run on Hawkeye had a depth to it. Instead, here, we have a lot of characters who aren’t established, and they certainly aren’t established in their relationships with each other.

Quire and Gwenpool seem like distractions. Boy Hawkeye had basically two lines. Fuse only gave us the mystery of how he managed to get his hands on vibranium but seems to have lost a lot of his nervousness about bounding into action.

It was good that Tigra got out of B.R.O.D.O.K’s mental control, though she may take out her rage on the other giant women, who are also innocent. The West Coast Avengers may need her with giant Kate, who’s been turned into a literal hawk.

Caselli’s art and Farrell’s colors were fabulous, however. They fit with greater LA beach look so well. Besides all the destruction, it seems like a beautiful place to visit and hang out. Maybe we can have some relaxing times after everyone is made small again.

I kind of hope Thompson tackles the inevitable gentrification that will happen when all this space goes up for sale after being destroyed.