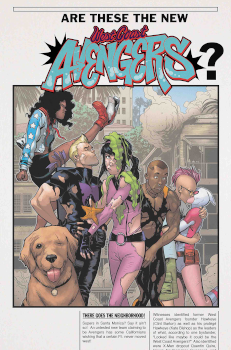 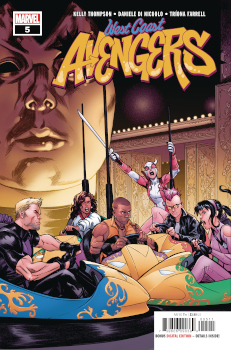 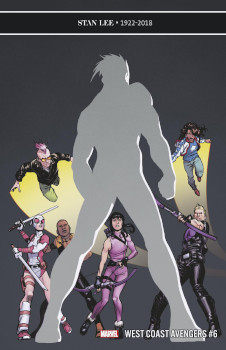 The nice thing about this issue is that they figured out how to defeat B.R.O.D.O.K. and stop the giant women creatures from being brainwashed in the last issue. Which meant, this issue was resolving and having character moments. Thompson’s writing is always the most charming with character moments.

I’m absolutely in love with the idea that Kate’s cellphone is programmed to play “Born in the U.S.A.” when Captain America calls her. Since too many people don’t understand that it’s a war protest song, focusing on the problems of veterans when they return home and is not a jingoist tune, it additionally makes for a perfect encapsulation of all things Steve Rogers.

Giant hawk Kate, who can control herself and knows what’s happening, grew on me. For some reason, her costume looks less ridiculous on a giant hawk-shaped woman than her normal, petite form.

Quinn wearing a “future Phoenix” t-shirt is utterly ridiculous. Plus, I’d hate for a man to become the Phoenix. (Though I’m sure there has been because comics.)

Throwing M.O.D.O.K. into space seemed like a very logical conclusion to everything. It’s not like Kate killed him. Tigra is pretty pissed she doesn’t get to rip him apart, though.

Ramone and America meeting and then flirting was pretty great. I’d also be Ramone in all that danger — saving the neighbors and going back for the pets. Lucky covering his face at the moment when the ceiling almost fell on them was pretty dang cute. Kate has no room to talk about her two best friends dating when she’s already dating Johnny, who is Ramone’s brother.

The dragon lady deciding that she wants to stay a dragon is the best. She’s a vegetarian. Also, I’m pretty sure we’ll see her in some West Coast Avengers issues.

The entire reality TV basis and then going on late-night TV was silly. I’m going to assume Steve is calling for a better reason than Kate, implying she got official permission to start up the West Coast Avengers again. But this premise does give up more hilarious character moments, which is why other writers like Matt Fraction and Brian Michael Bendis also use this type of setup to convey characterization.

I do wonder how people reading this book, who did not read Hawkeye, feel about Thompson bringing in the plot about Kate’s mother. If that’s Kate’s mother, which who knows, given how many clones this book has had. Especially since we see Madame Masque’s face when they first get to the amusement park.

Gridlock was ridiculous, but fit the LA tone of this book. Of course, Gwenpool would go after the kitten and almost cause herself to get seriously injured (maybe).

I called Bridgitte, being their dragon transportation.

Everyone seems to get taken out pretty quickly, and I enjoyed that they were all sidestepped by their emotions and distracted by the matchups when the team was divided. Kate’s the only one not knocked out, but emotionally out-of-play.

Madame Masque may be the villain running the show, but that’s a lot of baddies that the West Coast Avengers are up against. I like that the villains want to run down the team’s self-esteem and have them leave Los Angeles so that they can do more crime in peace. Guess going on that late-night TV show was a bad idea.

It seems like M.O.D.O.K.’s land sharks wouldn’t also be able to swim. I’m not a shark expert, but probably one or the other. Not to mention — how do they breathe? Gwenpool punching the land sharks in the nose was some silly humor, just foolish enough not to make you worry about shark safety. Also, I’m a big fan of sharks and great whites, and I’ve had the pleasure of diving to see them in South Africa, which was a highlight in my life’s adventures.

Kate’s mom seems to be real. She’s somehow tied up in the villainy, but unclear how or what level.

I was surprised Madame Masque was so unconcerned about Kate running around uncaptured. Okay, they aren’t going to kill the other heroes, but Kate has caused a lot of troubles for Madame Masque in the past.

Fuse stretching his powers to rescue his sister from sharks was great. Though entirely understandable how he’s uncomfortable turning into a liquid. I don’t understand how their powers are being — kind of — dampened. I’m going to take it that the earplugs have something to do with stopping the blocking from working.

While I don’t know how to feel about Noh-Varr showing up (especially since I like Fuse), the cover art being a throwback to classic West Coast Avengers comics was pretty freaking great.