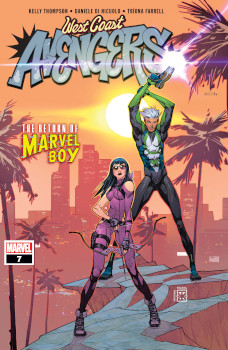 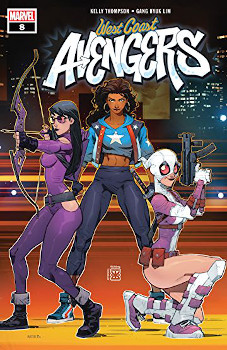 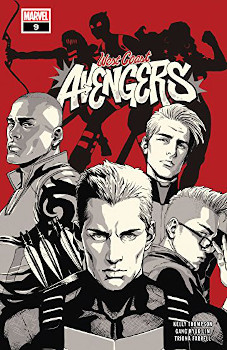 Now, much do I not care about Noh-Varr? A lot. He was always my least favorite Young Avenger, and here, he isn’t adding much. Especially since I’m not a love triangle fan, and I’m pretty happy that Kate’s with Johnny.

Loved the subtle advantage that Hawkeye’s disability gave him, between him and Kate using hand signals to his lack of hearing helping them defeat — or at least chase off the West Coast Masters of Evil. I did, however, see some mentions from people who did not realize Hawkeye is deaf, and I wonder how this has been portrayed since Fraction’s run on Hawkeye.

Jeff!!!!! I would want to keep him too, Gwenpool. I love her saying this was what they got for not letting her get a cat.

I’m still meh on these villains. Especially when at the end, we find out that Kate’s previously established as evil father is controlling them — or at least bankrolling them. Is Kate’s mother trying to take him down from the inside? While I have lots of questions, I’m not sure if I’m interested in the answers.

While this story seems not as fresh after also reading Hawkeye, Lim’s art did. It’s anime influence is obvious, but there are subtleties to their style that bring out each character. I particularly thought America, Quire, and Kate’s mom were well-done.

The action sequences were probably some of the best we’ve seen so far, and I really enjoyed the little movements of all the characters when they were back at Kate’s place. They all seemed like people who enjoy being around each other — for the most part, and except Noh-Varr.

Clint pretending to be Simon Williams was pretty hilarious. All the ridiculous body movements worked well, and of course, a celebrity with lots of money, resources, and connections would be easily invited into the cult. And of course, they already know what Kate and the team look like. Why did Kate think she could go undercover as herself? She didn’t even try a simple disguise.

I appreciated how much Gwen and Quire were fucking around while beating up those minions, instead of just taking them out. Also, none of the minions having pink hair was a great gag.

Okay, maybe between the art and the gags, I did enjoy this issue just a tad more than I thought.

I don’t know why I was surprised that Kate’s mom was a vampire, but I was. Also, does she have a name yet? (Eleanor, I just Googled.) I assume that when Eleanor was dying of whatever diesase she had, Derek resorted to having his wife turned into a vampire. Which also explains why she’s so nicely preserved, and why she sticks to the shadows.

Shouldn’t Quire have figured out Eleanor’s vampirism? He claims to have de-vamped Jubilee (which may explains why he was added to this cast), so wouldn’t that mean he’d have some extra sensory information and be more aware of vampires? I still don’t fully understand his powers.

Jeff remains the cutest character. I fully support a land shark dog/cat. (Though Lucky was absent from this adventure.)

Clint getting found out for not being Simon was the best foil. Of course, Simon was on live TV saving someone.

Not sure how America’s star dimensional punching powers fit the vampires’ prophecy, so I hope we get a little explanation. But can you blame Eleanor for at least trying?

I have mixed feelings about Ramone also having some kind of superpowers. I do like that her and Johnny’s mother was a Dora Milaje, which explains how they got vibranium. Obviously, whatever thing happened to their mom will come out in this comic book, once we’re done dealing with vampire Eleanor and clone Derek.

I was confused about why Ramone didn’t take her mother’s spear into battle with her. Maybe Lim just forgot it?