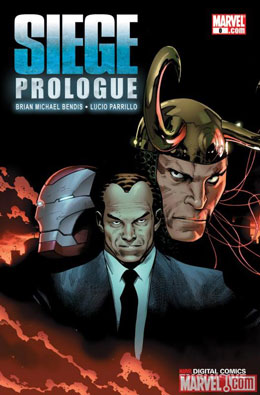 Yawn. This isn’t event fatigue; this is not having any investment in the story of Asgard. Of course, I’ve always been a TV over film person, so it makes sense that these big blockbuster comics don’t intrigue me.

What’s worse is that I don’t believe for one moment that Norman didn’t already know everything Loki told him. Obviously, only a bunch of exposition to help out the reader. But it was just kind of boring exposition with gutless posturing.

Side pet peeve: When did Loki become a man again? I really liked Loki as a woman. (Slott was the first writer I noticed using a male Loki.) Plus, all the character profiles in the back were of men. Yes, that means only men are considered the major players in the Siege. Which makes me even less interested than I was before.