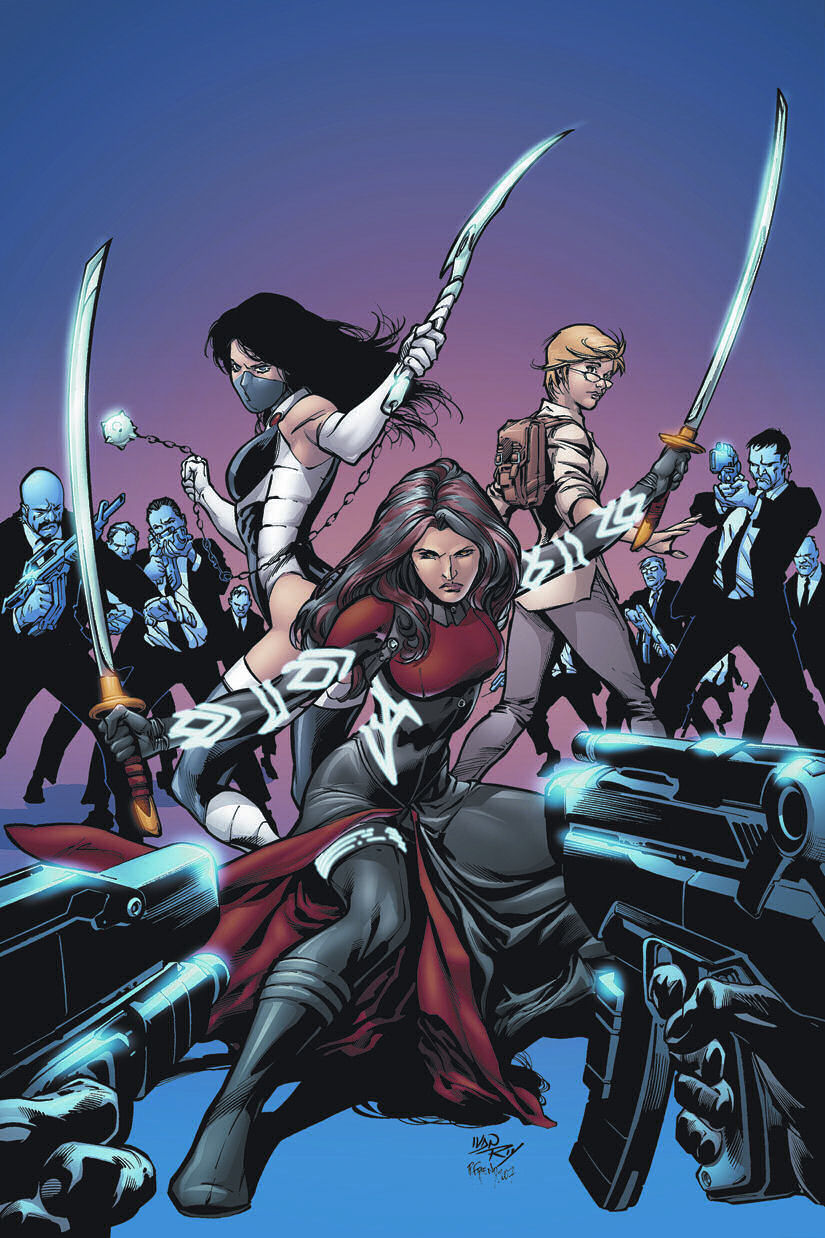 Wildstorm: Revelations tradepaperback, Midnighter: Armageddon #1, and Wildcats: Armageddon #1 were pretty strong books, which was a lovely surprise. Spoilers to follow…

Wildstorm: Revelations is an outcropping of the Armageddon series. Basically, Wildstorm decides for a big relaunch which includes the end of the world. I mean, why not right, it works to bring the reader numbers up with Marvel and DC? Plus, everyone loves a good apocalypse story, right?

So in the Armageddon books, Void goes around trying to convince various members of different groups that the apocalypse is going to happen and they need to prevent it. She takes them to the future and is like “we’re $%!#@! if you guys don’t do something.” Of course, only one of them bothers to listen.

Since Midnighter had his own series at this point, the Void grabs him and puts him in the future. As one of the earlier comics in the series, the writers really don’t have how bad things are going to get nailed down. The future turns out to be much bleaker than Midnighter’s glance into it.

Of course, the first thing Midnighter is relieved to see is that Apollo’s still alive. (Awe.) Then they fight some “bad” guys and Midnighter starts to realize things are quite as right with the world as Apollo isn’t kicking ass at his normal speed, Swift’s wings are injured, and Jenny and the Doctor are both MIA. It’s later revealed that Jack’s face is all messed up as the cities are all messed up too.

This one shot is a good, necessary read to pick up The Authority: World’s End because there are a few points, such as Jenny’s and the Doctor’s reasons for being MIA that aren’t covered (so far) in the new Authority comics.

In the end, Midnighter, back in the present, goes to his team all ready to fight the coming apocalypse. Of course, his team’s response (particularly Jenny’s) is to say, and I’ll steal from Buffy: The Musical:

I’ve got a theory, It doesn’t matter.
What can’t we face if we’re together?
What’s in this place that we can’t weather?
Apocalypse…we’ve all been there,
the same old trips, why should we care?

And they don’t do anything proactive.

Luckily, Nemesis actually listens to Void and makes a decision to fight the future. (Sorry, still feeling bad that I never caught The X-Files summer flick.) She’s told to find a woman called Savant and given a “I’ll automatically trust you word” from a future Backlash, who’s friends/teammates with Savant.

Both the Armageddon singles I read were pretty entertaining. Midnighter’s gave insight into the future and his characterization, while Nemesis was more about her characterization and why she’s going to try to save the world compared to the other slackers.

In order to stop the apocalypse, Nemesis, Backlash, and Savant must figure out how it happens by stealing information from various groups from Stormwatch, the Authority, and more in Wildstorm: Revelations. It helps that Nemesis and Backlash are great warriors and Savant is a post-human hacker.

There’s lots of neat fight scenes and clues into parts of the Wildstorm universe without feeling like you need a bunch of background. Plus, the title revolves around three women who are saving the universe and it passes the Bechdel test with flying colors. (Sadly, all of them are white…) There are more interactions with family members and former teammates than lovers. And when they have to infiltrate a country in nearly nothing, they do point out how stupidly sexist the outfits are.

Of course, it does turn out that because they’ve been making enemies instead of friends. Furthermore, it’s possible that they bring about the apocalypse sooner than it otherwise would’ve happened… Particularly because in order to fight the apocalypse, you need more warriors than three.