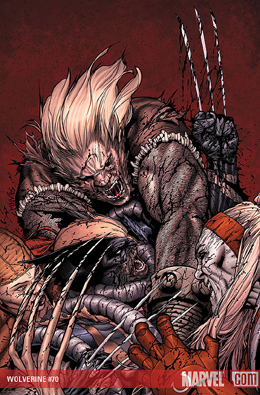 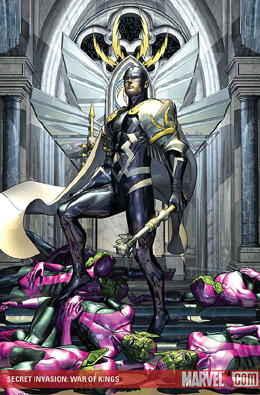 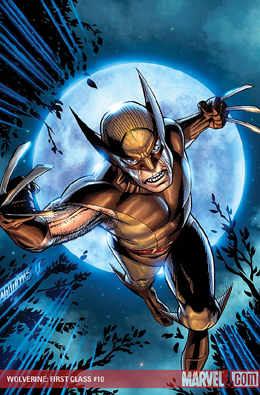 Jason got up and I picked up his Wolverine while he was washing dishes. See, he loves Wolverine, reads anything and everything with Wolverine, and I make fun of him. I’ve been told that I can’t review this issue since it’s the last in a story arch that I haven’t been reading the title.

See Jason tried to convinced me that Millar wrote something well. I think Millar comes up with some great ideas. Like Superman: Red Son, it’s an awesome idea, but doesn’t have the greatest follow through. And “Old Man Logan” is certainly an interesting idea, a world where Wolverine hangs up his claws and the villains have won. Blind Hawkeye is intriguing as well. However, the storyline just felt anti-climatic that Mysterio had made an illusion that all Wolverine’s X-Men friends were his enemies. And kind of cliche, but don’t tell Jason that.

This comic is actually quite good. Though beware that the first few pages with the Skrulls are a little slow. (Or maybe that’s Secret Invasion fatigue on my part.)

It’s a very engaging storyline about crossing the line into full scale warfare with an oppressed people becoming the oppressors. This issue is told from Crystal’s point of view, which is a smart choice given that she is the Inhuman most Marvel readers will be familiar with. She is also the most “human” one in that she was an Avenger and a member of the Fantastic Four. Crystal’s worry that she’ll still have to marry Ronan the Accuser and wants to kill him herself instead of marrying him gives this story a common link to the reader.

Medusa and Black Bolt’s rage is played out perfectly in their roles as weapon and voice and king and queen. They are terrifying, even to their own Inhuman family. Especially when Medusa ignores her sister, Crystal.

I do like the idea that it was destined that Black Bolt take over the Kree throne. I think it’s more interesting than all the Skrull prophecies. I’m also pleased to see that Marvel is finally doing something with the Vulcan takes over the Shi’ar Empire and trying to become ruler of the universe plot. It was definitely an interesting story in Uncanny X-Men, especially since the good guys technically “lost,” and I hope that it continues to be so.

I’ve been reading this series since the beginning, but haven’t been reviewing it. Mostly, it’s just cute. The real title should be Wolverine and Kitty: First Class, but we know how the marketing engine turns. (Wolverine’s only in how many titles?) The last couple issues haven’t been as good as the first, but this one has turned things around.

Van Lente has taken this story back to the basics. Back to Wolverine training Kitty to be an X-Man. Taking a cue from the “and whatever could possibly go wrong” book, Kitty is supposed to navigate herself through the woods without Wolverine’s help and asks what can go wrong. She and Wolverine go back and forth before she declares there are no mutant wolves in the forest.

Of course, there are. And one of them has taken a liking to Wolverine and turned him into her new pet.

0 Replies to “Wolverine and Blackagar Boltagon (Plus, Crystal and Kitty too)”