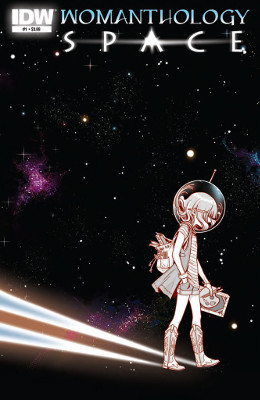 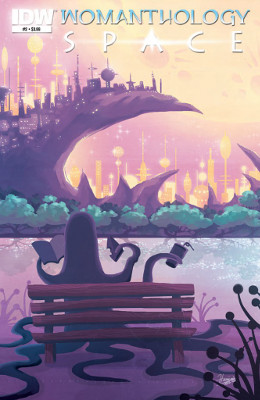 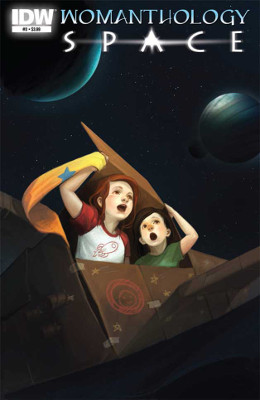 Hickman’s art was definitely the highlight of this story. Otherwise, the tale felt pretty blah. I didn’t really connect with Trixie and her longing for a boyfriend. That S.I.D. turned out to be a robot too, after Trixie delcared herself not robotsexual, was only kind of cute. Mostly, the story felt too long. It could’ve been a lot shorter.

Wooten’s art was best when showing Miranda Cassidy and the explosions. There were some great use of color to show the contrast of space against everything else. Though I did keep wondering if the main guy was actually John Constantine and Jesse Custer’s love child.

The story itself was a nice twist on the ghost story. I liked that Miranda actually wanted to be laid to rest.

Love this. I adored this story so much. For me, the love of space, space exploration, and the unity of a people behind going to space is what gets me most excited about space stories. Just exploring space because.

This space race between Japan and the US is awesome. Especially that it’s about getting women and humanity back on the moon.

I loved that it ended showing one of them on the moon. You don’t know who, but that’s not important. What’s important is being back on the moon. <3s.

“The Adventures of Princess Plutonia” by Ming Doyle

While I appreciate Doyle’s attempt to turn the ’60s space alien princess trope on its head, it just didn’t do anything for me. I didn’t care that Plutonia saved her love, Max Dunn, or that she defeated Mallika. It seemed just as shallow as the tropes being gender swaped.

This is super adorable. Captain and her crew are adorable. I loved her lecturing Chambers about no fraternization before some kissing action.

When Williams says, “Holy Crapping crap!”, it’s just like something someone would say when you think it’s a moon, but is a cat!

Space cat with lasers was just amazing. Didn’t see that happening. Funny and cute and everything I wanted to read about. I definitely want to read more about the Space Girls.

I think I liked the idea of this story a lot more than the actual execution. I love the tribute to the first woman who ever made it into space. The layers of why the Soviets picked her for the mission.

Fernandez’s art really brought forward the entire feeling of the story. From the simple beauty to the hard work to the anti-climax of when Valentina Tereshkova returned to Earth.

This was my least favorite story in the book. It just didn’t do anything for me.

Sure at the end of the day, Chloe did actually chop of Haller’s head, her horrible boss. However, I’m not sure that gives her anymore characterization than baseline annoyed worker. Like I’m seeing George from Dead Like Me and Claire from Six Feet Under and their love of corporate jobs.

Perhaps just too much plot for the few pages.

“All Cats are Quantum” by Ellise Heiskell
Art: Maarta Laiho

I really wanted to love this tale. I love cats, and what’s better than cats in space? Right.

My favorite part — besides the cats themselves — was Laiho’s art. The cats were great, and they were playful and had all sorts of spice.

Perhaps Heiskell was also trying to tell too much of a story in a short time. I do love that the aliens weren’t automatically evil. I also like when they come to meet other creatures and that they just don’t care about the humans. Loved seeing them buying cat souvenirs.

But I feel that the story should’ve been more contained to the shop and the main character launching herself into the future.

I greatly appreciate that there’s a piece in here about inspiring other women to write comics. It was pretty cute too.

This story was okay. Kind of gross. Bugs in space creep me out, and everything always reminds me of that scene in Aliens or the ear bugs in Star Trek II: The Wrath of Khan. I still have to turn my head away for that scene, even though the latter is one of my all-time favorite movies.

Overall, it seemed like too many stories being told in a small space. I did feel bad for the Captain at the end of the story, but not the rest of the characters. She at least seemed upset to be blowing up her ship.

I love this story from the beginning until the end. Foster-Dimino’s art matched up perfectly to Edidin’s story and the tone worked fabulous.

I love how they build their spaceship. Rabbit hutches! And that when they leave their cat behind, they tell it not to chase shoelaces. Too cute.

Whether or not they actually went to space, I believe that they did.

I adored the tale of Shriya Singh and how her ship, Vesta, keeps her safe. Keeps everyone safe. Perhaps too safe. I loved this idea of ships that just go where they think is best and take and care for people along the way. This type of exploration peaks my interest. And DeGuzman’s twist on it is just perfect. Shirya wants something different, something to happen in her life and that’s why she’s in space.

“Lily Renee: She Fought Nazis with Pen and Ink” by Trina Robbins

I feel like I can’t really rate this piece. I do love Robbins’ herstorian work, and how she uncovered Lily Renee. Both Renee and Robbins are comic treasures.