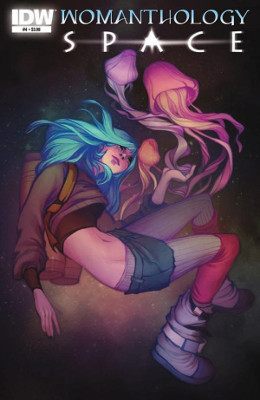 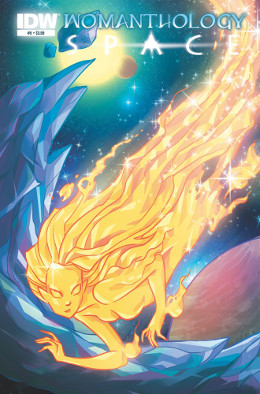 This story tried really hard. I like the concept of the thief rescuing a piece of living artifact from its boredom and loneliness behind a glass case. And I liked how they were both storytellers. However, it was just a bit disconnected for such a short piece.

The Smell of Sunshine by Devin Grayson
Art: Lindsay Walker

Flynn Celtchair MacShay got the bad end of the tale. Of course, he also proved that he was the military’s guy in the end.

That said, I felt disconnected to his reasonings why he would know they were all under the influence of a military weapon and still blame the entire massacre on monsters. Maybe it was his way of processing. Maybe in his world, it was actually known that the military did things like this. Unfortunately, there’s not a lot of information to go on, and Flynn wasn’t a character I felt identification with.

While I appreciate Womanthology hosting different types of writing and art, Wang’s art wasn’t my favorite. I wish she’d put the care into her backgrounds and places for lettering that she’d put into her characters.

That said, I love Ellis’ story about the star that comes down and what dying means in space and how our actions are the only thing that matters. All lovely themes, and all executed very well in this short format.

The story was pretty cute. I liked the awkward girl who finds something she loves. It works well as a story about a teenager who’s still learning about her body and her potential. The artwork, however, left me a little cold. I wish Nock had better conveyed movement, especially running.

The Wind in Her Hair by Allison Pang
Art: Chrissie Zullo

I loved Zullo’s art here in the this story of Luna, who falls from the city and finds the last tree with its robot guardian. I’m always interested in stories of environment and of a different kind of love. However, it didn’t feel as coherent as it should’ve been. The world came through Zullo’s art, but wasn’t accompanied enough by the writing itself.

In the Drink by Laura Morley
Art: Sara Richard

Not really sure what this story exactly had to do with the outer space theme. Yeah, seemed a little silly and definitely didn’t draw me in at all.

I Will Return by Cecil Castellucci
Art: Kel McDonald

While perhaps an interesting metaphor for how planets and other space bodies orbit around a sun, I wasn’t drawn into it like I should’ve been. The dancer had little personality except for her obsession. With a man. With love. Not for me.

Wow, there was a lot of stuff packed into this story. I liked it alot. I loved that the planet was getting destroyed by a meteor, and everyone knew it. I also liked that it was from the eyes of children. The puritanical point-of-view of the adults contrasting with the teenager’s teenage behavior worked so well. I love that they held hands even though it was forbidden. Then the ending line was brilliant.

Dive into space with these women and buy Womanthology: Space