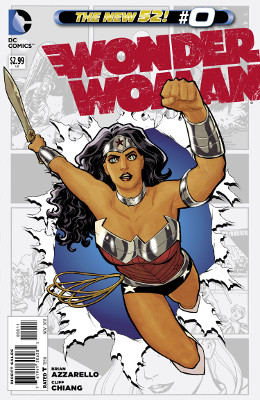 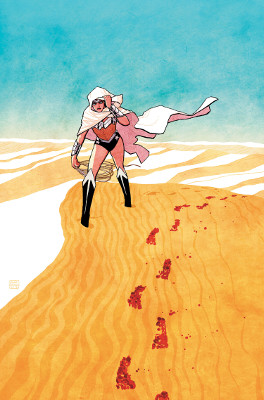 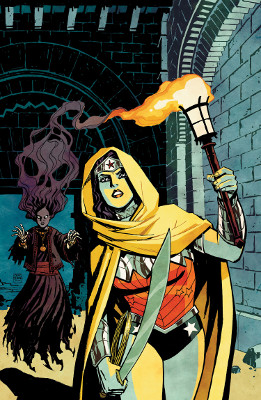 So did Wonder Woman know that Hippolyta was her mother or not? At least, Azzarello makes it out to be that Diana thinks she’s just fashioned from clay without any parents. And then later, on her 13th birthday, Diana talks not about disappointing Hippolyta, but her mother. I’m not a fan of a version of this tale where Diana is not raised by Hippolyta. Much like how I’m still upset by Zeus being her father. Worst canon change ever.

Otherwise, this tale was very enjoyable. I loved seeing the young Diana and how competitive and adventurous she was.

I have mixed feelings about War being her tutor. Because he’s a man, if a god, and an outsider to Themyscira. Diana seemed a bit less freaked out than someone who’s apparently never seen a man in her entire life might be. (Even if she does fight monsters.)

I did enjoy how her fight with the minotaur ended up. Mostly because Diana is a character who seeks not to kill her enemies. And how War was just not about the mercy that she shows people and creatures of all types.

Started off this issue with not digging Akins’ art around the First Born and ended it feeling like there might be something slightly interesting to happen in the future of these comic books. If Wonder Woman can keep Zola from killing Hera and give Lennox enough time to heal and maybe find the other children of Zeus.

I really loved the parts with Diana protecting the little girl in Libya in her quest to find Siracca. I felt that so much of it touched on exactly who Diana is. She is the protector of women and children. She defends those who cannot defend themselves.

Of course, I was extra surprised when the knife hit the little girl. Who turned out to be a pile of sand created by Siracca. That it made me wonder if the knife wasn’t created in the same way. Just to throw Diana off.

I liked the story of Siracca a lot. Well, not so much her backstory with Hera destroying her and Zeus pulling her together, but her interactions with Wonder Woman. Wonder Woman as the champion of women and children always makes me happy. And her as a peace-loving person who doesn’t actually want to fight or kill people.

I also really liked whomever was drawing the final scenes between Siracca and Diana. They were such a great evolution of classic Wonder Woman style.

That I continue to not like in this story — and where it took another turn — is the green with envy coming from Hera due to children. Clearly, we’re getting the backstory about the First Born and how he was taken from Hera compared to how Zeus saved all his other children.

I’d hoped that this story would move away tales of how women have babies and give birth. But apparently, not.