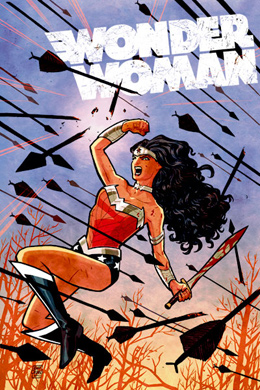 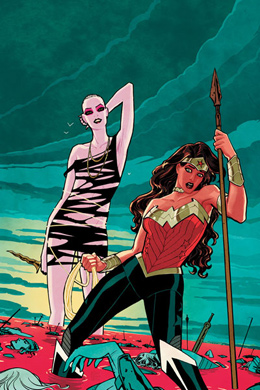 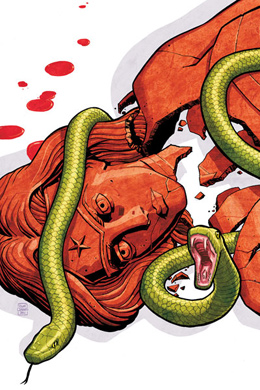 This series is not off to a bad start. Of course, there were a few confusing elements (who’s talking? who’s the dude on the roof?), but overall, the plot got its start. I suppose one nice thing about a Wonder Woman book is that you don’t really have to introduce her and sit there and exposition her superpowers (like so many of the other new 52 books).

Chiang’s art is a little harder of an edge than I’ve seen on Wonder Woman’s books. It’s not a bad thing, just different. The question remains: pants or no pants? I kind of like the idea of mixing it up. Hermes looked to be really inspired from the Disney Hercules film.

Okay, what the heck’s up with the blonde Hippolyta? I suppose I should be thankful that she’s not dead like in the last two “reboots” (Flashpoint and JMS’s “Odyssey”). Though I have a fear that with the Amazons thinking other Amazons are monsters and fighting each other thing that she might end up dead.

While I’m totally cool with Hera getting all jealous and Diana “hiding” Zola on Paradise Island, I’m not cool with Zeus being revealed as Diana’s father. This is just stupid. The whole idea is that Diana doesn’t have a father. That’s such a core component to who she is: a woman raised by women to take care of women. Gah. I suppose this still may play out to be something else.

How much do I love Zola and her healthy sexuality? And the jokes about Zeus and his different forms. I like Hermes as Zola’s protector and Diana’s friend. I love his chicken legs.

Seriously, we’re diving right into another Diana doesn’t know who she is and is banished from her mother, Paradise Island, and her sister Amazons? Seriously? Can’t someone do a truly original plot with her? Is that so freaking hard? I mean, even in the original stories when Marston was like ‘Diana can’t come back to Paradise Island after she leaves with Steve to man’s world,’ it only takes 7 or less issues before she’s back with her family and friends at home because even Marston realized he was only shooting himself in the foot.

Okay, this may be different because it’s Diana’s decision not to come back to Paradise Island, but still! I felt like we just waded through all that horrible JMS stuff about Diana finding her identity and now this.

I am a grumpy Wonder Woman fan!

Chiang’s art was a little less impressive on this issue. I can’t quite pin what about it was. There were a few panels were Diana’s body was an awkward shape, and I couldn’t tell if that was Chiang experimenting or his style, but it was awkward.

I’m so not down with Zeus being Diana’s father and her being born the normal way. Or being part god as it makes her powers so much less cool. *sigh*