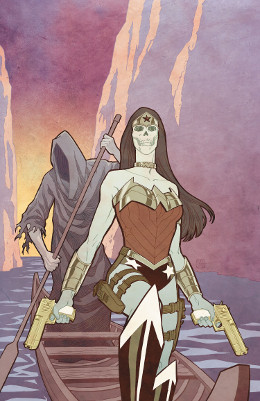 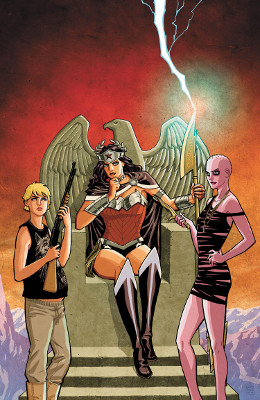 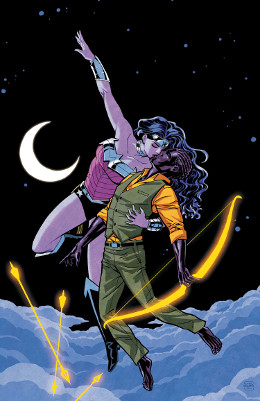 Ugh, I feel like it was such a cop out that Wonder Woman loves everyone. Nice deus ex machina, Azzarello.

The storyline is still creepy, and there are major sexist issues happening. Even if Wonder Woman did end up saving herself and uses love. It doesn’t erase what happened to lead up to it.

I do like that she used Eros’ guns, in conjuncture with Hepathuses’ mirror, to shoot Hades and fill him with love for himself. Might change a few things about the Greek Gods’ version of the afterlife.

Wonder Woman had much more agency in this tale than she has in a while. I like the fight that she had with Apollo and Artemis as it felt like something she would do, and while they did defeat her, they didn’t end her. (Though Lennox has some healing to do.)

I figured that Zola would end up in Hera’s clutches sooner rather than later. I’m betting that Zola’s going to give birth to Zeus in a reincarnated state. I pretty much think the whole Diana and Hermes go to Mount Olympus is going to end with Zola going into labor and out popping Zeus. And I don’t think they’re going to play this one like kid Loki.

I kind of wish someone would do a Mists of Avalon treatment on Hera’s stories about being so jealous.

The fight was probably my very favorite from Azzarello’s run. And Chaing’s Apollo and Artemis artist choices are just fabulous.

Let’s first talk about how stupid this cover was. Once again, it made it look like Wonder Woman was promised or fell in love with one of the Gods. No, Apollo didn’t want to makeout with her; he wanted her to kiss his ring and submit to his authority as the new ruler of Olympus. This is just a little different. Worst.

Completely called Zola going into labor. However, it apparently wasn’t Zeus reincarnating himself. Though I did not call Hermes’ betrayal and him delivering the child to Demeter for her to raise.

I liked that Wonder Woman pulled off her gauntlets and that Azzarello reminded us whom Diana had pledged her service to. And that she could lay the smackdown on some gods.

I loved the moment when Wonder Woman saved Zola and reminded her that she said to stay close by. This book needs more moments like this one. And less battling of the gods.

Not so sure how I like Wonder Woman having a permanent mission.