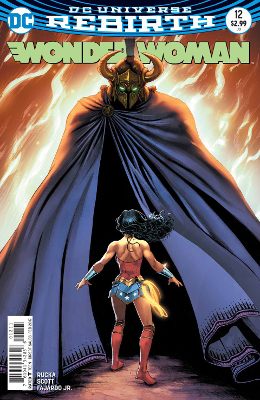 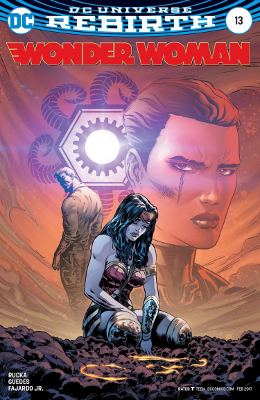 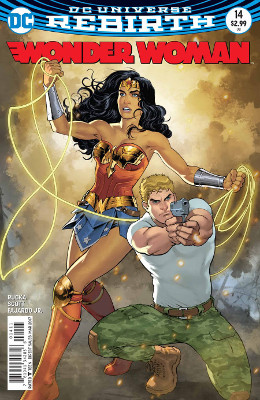 I wasn’t expecting Ares to come into play so soon. It makes sense since he is traditionally Wonder Woman’s god nemesis and to tie up any remaining New 52 nonsense. (If Rucka hasn’t already blasted through that crap thoroughly.)

Yay for a queer Etta and Barbara Ann! While I was sad that Etta and Steve weren’t together, if the reason they aren’t is because Etta likes women, I will more than live with that. Suffering Sappho!

Speaking of which, I loved the canon acknowledgement of Diana’s queerness. I love when Steve finally realizes that Diana has left her home forever, and the true ramifications of what that means, that first he asks about her mother and then if she had a lover. I appreciate that he doesn’t blink at her response. Instead, he offers her his hand in friendship and comfort.

Diana’s discoveries of her powers once again displays the brilliance of Scott’s art to express Diana’s innocence to the world. I loved her talking to Steve about what she and the falcon conversed about.

First, this storyline being called “Angel Down,” just makes the Lady Gaga song get stuck in my head.

I’m not sure this issue captivated me as much. Perhaps while I understand this plot mechanism and unthreading of the tangles editorially of the Wonder Woman book, I’m here for Wonder Woman’s POV. I struggle with any narrative that weakens her mind.

Perhaps there is something to Doctor Poison being the villain here with Veronica Cale. I assume there will be much to unfold.

While I generally like what Rucka’s done with Steve Trevor here, I’m not sure I grasp Steve’s voice. There were a lot of words. But something about his characterization wasn’t there for me. Maybe it’s because Steve, if functioning as damsel, is a blankslate character. Here he is not the damsel. Wonder Woman is incapacitated.

Though I did appreciate seeing Steve take care of Diana from his deep sense of respect for her and their friendship, instead of as some kind of boyfriend.

There were 3 things that propelled me to rate this final Year One issue 5 stars:

I will miss Scott drawing Wonder Woman. She’s drawn one of my favorite versions. Especially in how she makes Diana look younger in her heroism and exposure to man’s world. Her facial expressions are incredible.

I don’t find Ares a very compelling character. I know, I should get used it as this is a Wonder Woman book. I saw some criticism saying that the fight between him and Diana was too short, and that there was no way she’d win. She didn’t win. She just literally didn’t have he wanted. (Which is a nice callback to issue #13.)

My only major suspension of disbelief was Steve being dragged along, very quickly, across the globe with Diana. Super ridiculous that Steve was shirtless the entire time. (I’m sure this was on purpose to make a statement about Steve’s gender role reversal as he’s the hottie damsel.) Beside the shirt, I don’t understand how Diana could fly around the globe at rapid speed with Steve and Steve not die from exposure, g-force, pressure, lack of oxygen in the atmosphere, etc.

I know, I’m nitpicking, but science!