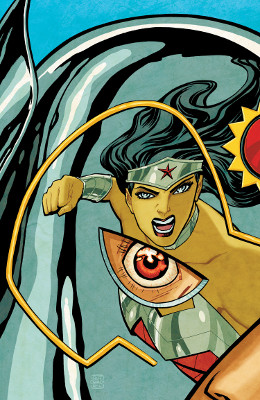 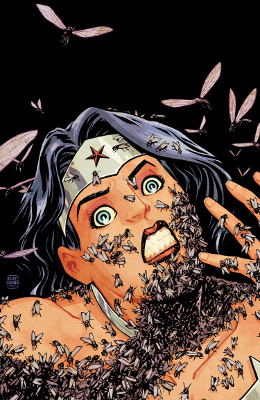 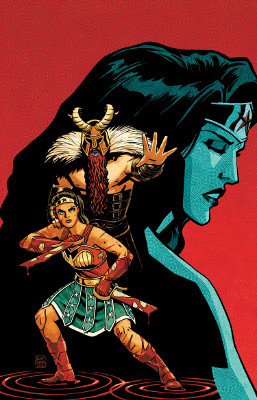 This is actually one of the better issues. My favorite part is Hera and Zola hanging out together. I love Zola installing some 2013 feminist logic about Zeus’ bad behavior. I agree. Hera should be going after Zeus, not after the women, who for the most part don’t know he’s married.

I’m not sure how I feel about this Orion character. I suppose only time will tell as it seems that he’s going to be a somewhat permanent fixture to this team. (Guess they couldn’t replace Hermes with a woman or something. You know, no Etta Candy or any of her awesome.)

Milan seems interesting. I’m kind of curious to know more about what his powers are really about. If the others are kind of scared of him, like Lennox, he can probably do more than create a bunch of dust and bugs.

Not really sure about the First Born.

Still wondering if the point of this First Born fellow is that so he attacks Olympus and then Wonder Woman must save them. Then she can make nice with them and maybe get the Amazonians back to human form. If this is First Born’s whole point, I’m going to be a smidgen disappointed. Though excited for Diana to have her sisters back.

I’m also still hoping that Zeus faked this paternity issue in order to get Wonder Woman to clean up his various messes. You know, a woman can hope.

Milan just being like “nope” to Diana and Orion fighting was pretty great. I’m surprised just how easy they found Zola’s baby. Though I’m still kind of thinking that baby is Zeus. The whole stars for eyes and killing Milan’s fly would make sense.

I wish Hera and Zola had gotten into a little more trouble before War, Stryfe, and Dio found them.

I think this would be my favorite book if everyone just sat in a bar and snarked at each other. Doing the whole idly threatening to kill each other and talking about Hera’s eyebags and speculating on just why War looks so old. Then this would be winning every time.

Except that Wonder Woman so needed to punch Orion in the face for slapping her ass. Or at least knock him out with one of her bracelets. It’s not like he was actually needed for the next part of the story. (Remind me again why Azzarello added him to the cast.)

I don’t care if he’s supposed to be evil now, I missed Hermes a lot. I love the chicken feet when he goes in for the karate kick.

I’m more interested in Cassandra’s story than if the First Born can kick Jaw’s butt. Or when Poseidon appears in his big ass sea whale where you kind of think that he also looks like Ariel’s father from the Disney movie. It’s just really a great design.