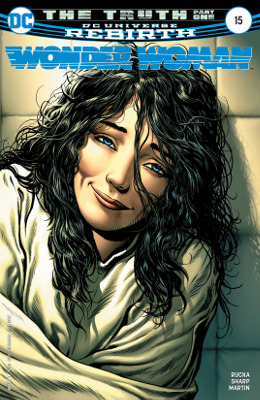 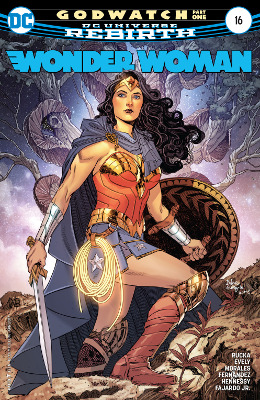 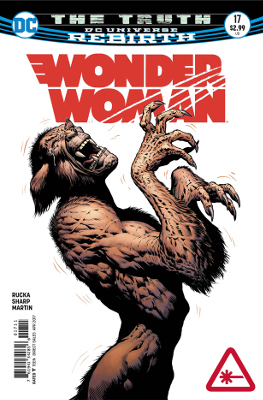 While I’m still not a fan of Diana unable to piece herself together and being in a mental hospital, I did think this was a strong issue.

I was most impressed with Sharp’s art and layouts. All the layouts serve to walk you through the various narratives of the story, and they all work well. Steve, Etta, and Barbara on the lam, in shady hotels, gives you a sense of the fractured nature and movement of being on the run. Diana and the snake is more organic, not as urgent and organically mismatched. (Even if I’m not sure of a Greek mythos worshipping character having a snake metaphor.)

Laura Martin also shined in the colors. She did marvelous work showing the differences between Steve, Etta, and Barbara; Diana’s situation both in her head and in the institution; and Hippolyta, Phillipus, and the true Amazons.

I do love this idea that Diana may get to return home, but only at the cost that everyone can now go there too. Looking forward to this unraveling.

I do miss Scott’s art already. And I wasn’t expecting these flashbacks again without Scott being on the book. Though Evely did step in for the issue about Barbara Minerva’s history. Now we’re learning about Veronica Cale and Adrianna. Not surprising that it’s Ares’ goons who are behind Cale’s quest against Wonder Woman and for Themyscira.

Of course, Cale and company haven’t done a very good job if all these years Wonder Woman hasn’t been able to go back and they haven’t gotten any closer to tracking it down.

There is some creepy shit for sure happening with stealing Veronica’s daughter face to put her in Tartarus. That’s some freakiness. I kind of like that Rucka’s upping the stakes.

Diana would be able to calm down a chrimeria. But perhaps putting it in a modern zoo wasn’t a good idea.

In general, I’ve really been enjoying this title. However, this issue felt weaker than the others.

One thing that stood out as not my favorite was Sharp’s art. Particularly the scenes with Barbara, Veronica, Maru, and Adrianna and the scenes with the Amazons. They felt sparse. And I wanted more emotions in the scenes where Barbara became Cheetah again. Especially since she so recently got her humanity and her friends back. Barbara did look vulnerable, but there was something missing that I cannot put my finger on. The cover actually conveyed it so much better, even if it basically was the same.

On the other hand, I do love Sharp’s Steve, Etta, and now Ferdinand on the run. Martin’s colors definitely help here. But Steve’s silly beard, their camo, Ferdinand’s hat, and in general Ferdinand’s giant Minotaur self were just great. I love Ferdinand. Of course, who doesn’t. He was so great in Rucka’s last time with Wonder Woman that I’m glad he’s back.

I’m mixed on how Sharp draws Diana. I did enjoy her very last panel when she returns and sees Ferdinand standing before her.

Seems like the resolution is to take Diana somewhat back to the story that Rucka started. Minus, Diana being able to go back to the Amazons. But at least, putting those qualities back into her and erasing a lot of other bullshit. Which I will be a constant fan of.