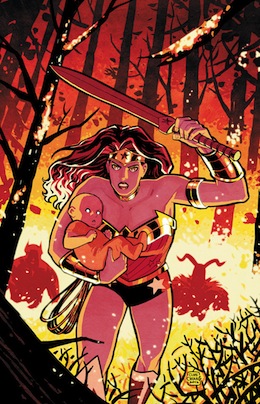 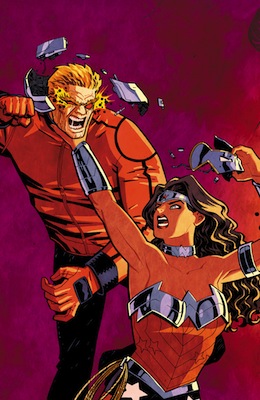 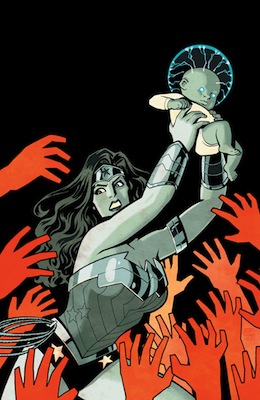 Not a big fan of Hermes and Diana fighting. I definitely liked Hermes a lot better when he was on Diana’s side, and it seems to me that she perhaps should’ve convinced him otherwise.

Orion has just been super cheesy in this plot. And it’s not surprising that War made off with the child by stealing him from Demeter’s womb(?). Don’t even start me on the symbolism of more women having babies.

Surprised that War reunited Zola with her child.

Seriously, Wonder Woman kisses Orion just so she can threaten him and grab his balls? Like what? This feels like such a male move. Something that Wonder Woman just wouldn’t do.

We still don’t really know why Orion’s sticking around. As if he hasn’t decided whether or not he wants to kill the baby. Or just waiting until everyone else tries and fails, then he’ll do it himself.

The gods seem rather without punch. I hope that the upcoming battle against Artemis throws a little more heat than the other battles.

Cassandra seems to be in over her head. And the First Born just doesn’t care.

Am I missing something? How did the First Born and Cassandra free themselves from Poseidon’s belly? Maybe I skipped over a page or didn’t recall because it falls under things that I don’t actually care enough about.

Glad to see that we get a little background on Cassandra. That she’s also one of Zeus’ children, and her metal throat came from when Lennox ripped it out as she was the Voice of God. I can see how she might abuse that power given that she seems kind of evil here.

Hrmmm… I’m not sure how I feel about this whole thing where Diana’s bracelets actually hold back her power. I’m much more into the old mythology of it. Azzarello seems to be determined to make a Diana who’s much more concerned about the possibility of turning evil based on power. Seems too much like the tropes of a woman being so powerful that she either must be murdered or somehow have her power dampened.

Diana once again kicks Artemis’ butt and the baby Zeke’s in trouble again. So tired.