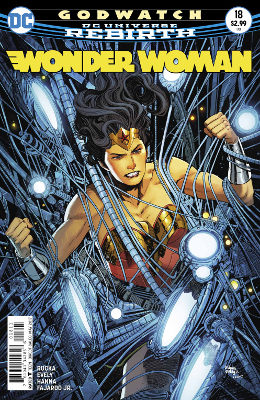 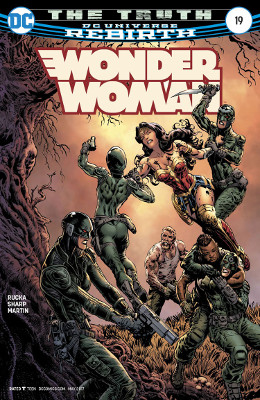 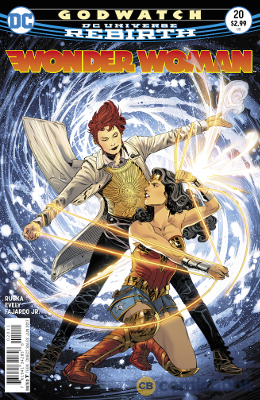 Veronica has her daughter without a face. She has the twin gods breathing down her neck. Veronica spends a year reconstructing her dead friend Adrianna into Doctor Cyber, an AI program with her friend’s memories.

What’s tragic is that we know they don’t find Themyscira any time soon.

Can Veronica’s daughter grow up like that? Certainly not being fed horror stories or not getting an education. How many years are between the two storylines? How does her body stay alive?

Barbara’s emergency button being disabled and then her being tricked by Urzkartga. I’m kind of glad that Rucka skips of the gorey details. Instead, we watched Diana being a hero, but not noticing a bigger and more important save.

This is lesson for Diana too.

Diana only wakes up in order to get shot by Maru? Doctor Poison can’t have just shot Diana with a normal bullet. She’d want to destroy Diana. Or maybe they think Diana’s body will be the way to unlock Themyscira.

I love Diana and Ferdinand’s hug. It was kind of the best. Of course, he is of her world, so I’m sure the recent revelations about Diana never having really been home led to an even more needed hug.

I like how Diana talks about wanting to be fooled. How she wanted to see her sisters so much that she was willingly deceived. (Of course, we have yet to “see” how Diana got “home” that first time.)

Barbara just keeps getting the short end of the stick. Though Etta loves her no matter what.

I love this version of Circe. I love her modern butch lesbian portrayal. Also how Diana doesn’t recognize her. Evely excels at drawing lesbians. Of this, I approve.

I appreciate that this comic explicitly lays out the timeline for events. That it’s been 7 years since Wonder Woman left Themyscira and 3 years since Veronica’s daughter was imprisoned. I also enjoyed the continuity about the dogs. It makes me want to go back and read those earlier issues for their appearances.

I do enjoy how everything in this book falls into Diana’s own ignorance about her powers, but also really everyone’s incomplete view of everything happening in this universe. Veronica doesn’t know her daughter is lost. Barbara doesn’t know she never had to do this. Diana wants to go home as badly as anyone else wants to go there.

But really, Circe is just freaking fun here. I love her so much. I just want Rucka and Evely to pen a Circe spin-off book.