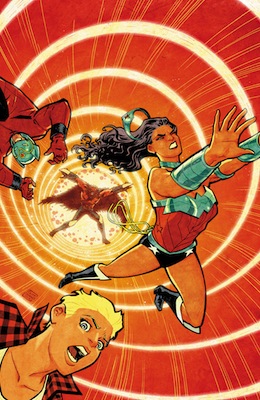 In this issue of Wonder Woman, it’s all we’ve seen before. They’re once again on the run from a powerful god (this time the First Born) and Lennox has sacrificed himself to the death (again).

What exactly was the point of that little trip to New Genesis? Except that Wonder Woman needed to be healed, and we apparently needed to know just how angst ridden Orion is. And give the First Born time to set London on fire and install himself as king.

What? Did Diana just become the War God so Azzarello could write more fight scenes? Or make an excuse for Diana seemingly liking to fight and probably going to start liking killing? I rather hate how much her story has become about men. She’s Zeus’ daughter, under the tutelage of War and now his replacement, and spends all her time protecting Zeke.

Except when she goes off with Hades to bury War and leaves Zola and Zeke behind.

Don’t even get me started on how dumb the First Born is. I tried to explain this plot to my boyfriend this morning and he was like “wft.”