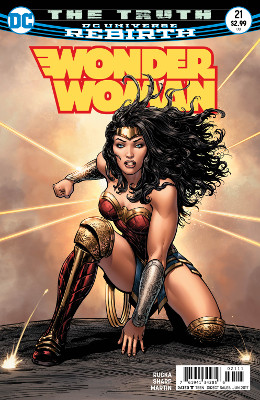 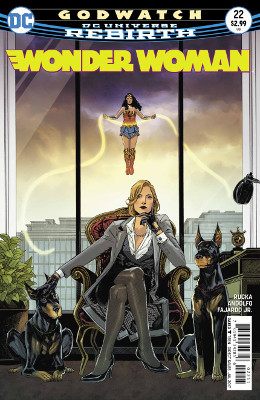 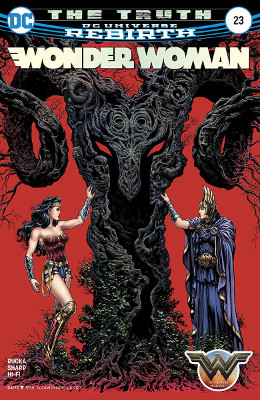 This issue teetered between a three and a four star issue for me. Sharp’s pencils and layouts here felt light. There was a ton of empty space that didn’t serve the book. It felt rushed.

That said, the story paid off for all the plot points that Rucka weaved into it in the earlier issues. I figured that Veronica would not be able to get Izzy back without the assistance of Diana. I didn’t expect the tree to be the housing of Ares’ prison. Like Cheetah, I expected it to lead directly back to the real Themyscira. Though I am now wondering how we saw Ares in those very early issues.

I’m glad Maru’s poison didn’t knock Diana out, considering she’d previously been out of the game for a while. But instead, it’s something Cheetah uses to her advantage to fight Diana. Of course, Diana uses Etta to lure Barbara’s heart.

Clearly, Ares stole away Izzy from his sons. Who no one would cry if Steve put down those dogs.

There are times that I wish this book was more linear. Especially since this is already a book with two major timelines happening that switches off with each issue. Though this was the first issue that I had to pause for a moment to recalibrate exactly where we were in time and space.

I’m not sure what we learned here. I’m not sure if anything happened to actually move the plot forward. Except the confirmed that yes, Themyscira is in an alternative dimension and now we know something more about the lasso’s connection to it.

One point I found confusing was Maru. Isn’t Maru already a known villain at this point? I suppose this could be one of those Rebirth versus other timelines kinks. Or one of those moments when I just have to let it go because otherwise my head hurts. (Which is DC’s fault.)

I really did not like Diana’s auction dress. I understand how Andolfo was going for Greek-inspired. I adored the stars in the necklace and earrings. But the dress’ high slits on each side and being able to see Diana’s belly button through the fabric, it was excessive. Excessive for no reason. I kept waiting for a nipple slip. As if this wasn’t a drawing, if the belly button shows through, so will the nipples.

I was additionally disappointed that when Veronica and Diana changed into their street clothing that the fashion just stopped.

Ever since I watched the Wonder Woman movie, I’ve been thinking about how Diana’s line about love and about her final reasons for saving humanity instead of teaming up with Ares to destroy it. She says, “I believe in love.” and “Only love can truly save the world.” I think about this in context of how cheesy it came across. If she cried for vengeance or freedom or a million other reasons, it wouldn’t have been cheesy.

The reason the love line is cheesy is because of how we as a culture treat love. How we dismiss feelings and emotions as weak. How this line seems odd and laughable in the movie, but how we need more lines like this in all of our movies. But especially our action movies.

Here Rucka takes that message of love and cements it. We find out that Ares has put down his mantle because of love. The love of Aphrodite. He remains chained in the tree voluntarily and of his own free will.

We find out that the gods, in their own way, gave Diana mental images of her mother and sister Amazons because they were trying to spare her pain.

And Phobos and Deimos, they only want to have their father’s powers. They cannot handle that Diana extends love to them, despite all that they’ve done. She subdues them, not with her fists or her sword, but with the lasso of truth showing them her love. (However, will she get said lasso back.) This, it turns out was her whole mission to man’s world.

In a twist of irony, Izzy cannot go back to man’s world. Instead, she can only remain whole either with Ares or with the Amazons. Hippolyta gets an unexpected adopted daughter. And gets a tearful glimpse at her Diana, who realizes she cannot go back. Veronica must say goodbye like Hippolyta did to Diana.

Love has… Well, there is more love yet for this book to explore. For all our stories to explore.