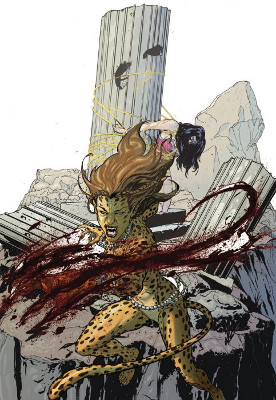 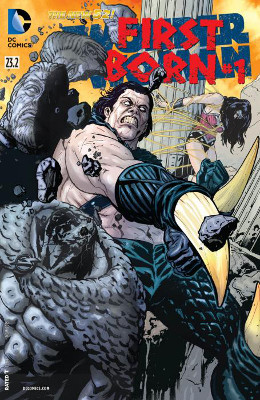 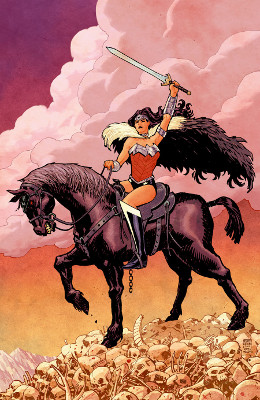 This book put me off on the wrong foot to start with. The stupid 3-D cover gives me a headache just looking it. Whomever decided this was a good idea lives even more in the early ’90s than I ever thought possible. It’s bad enough all those designs have leaked in, but now this bullshit.

Well, this origin story for Cheetah is only partial better than some others I’ve read. At least there’s no jealous male god that Cheetah’s reporting to. But she still has the expectations — this time, her aunt Lyta — that she fails to satisfy. Or maybe in killing Lyta she does. Who knows?

What I’m not a huge fan of is the cult around the Amazons and their message being distorted. We already know so little about Wonder Woman and about what the Amazons were like before they were destroyed in the New 52 that this story just rattles me the wrong way.

More stuff I could care less about. Oh my god, the First Born is super savage. Raised by hyenas. Even mated with them! Then killed a bunch of people and assembled a super huge army to storm Olympus, but Zeus and his brothers knocked him over. Then told the First Born, he could only try to take Olympus if Zeus stepped down (or was killed, in this case).

Also Apollo just took him out like it was no big deal.

Look more bullshit that I stopped caring about. Like seriously, is this even a comic book about Wonder Woman?

Hermes was right. Diana forgave Hera, but somehow she can’t forgive Hermes. Technically, Hermes tried to save Zeke. Even if he did a shitty job at it. And Diana is supposed to be all about forgiveness.

Which is why this whole God of War thing is dumb.

Not so fond of the idea of Cassandra going after Milan.