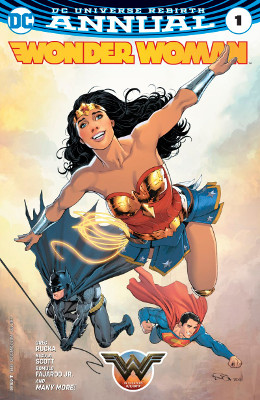 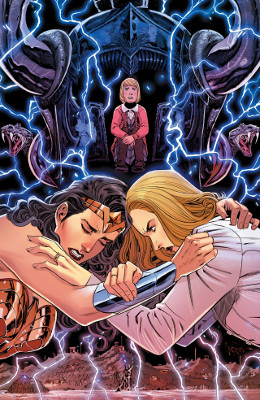 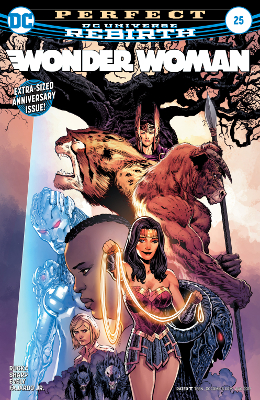 And then there were three… by Greg Rucka
Art: Nicola Scott

This is a story that I liked a lot after completely reading it, especially the ending. But what really made the huge impact was how I couldn’t stop thinking about all the nuances and how Rucka and Scott didn’t waste a single panel in it.

This is the story about when Wonder Woman first meets Superman and Batman in the Rebirth world. Of course, Batman is completely suspect of her. And Superman, he’s ready to give her a chance. They also are completely nosey in their own ways, but not as nosey as Lois Lane, who beats them to base. (Of course, they beat her to Wonder Woman’s actual location.)

It’s just masterful that Batman and Superman show up at the same time. That Batman tells Superman to go away, and Superman refuses because Batman might get lonely. Rucka’s Superman has a subtle sense of humor that plays off nicely with the always serious Batman. Plus, you can tell they actually do care about each other.

The full page spread where Diana comes upon them is Scott in all her glory. Superman’s face is priceless. He’s already awe struck. Batman looks like a cat who got caught doing something bad, and is only upset that he got caught.

The scene where they all hold the lasso of truth is my second favorite scene. When I read it, I thought that there couldn’t be another better scene. Here each of them states their name, and states their intentions in their heart. Diana says her full name, Superman both his secret identity and Kryptonian name, and Batman, just Batman. Superman gives him shit, and it’s perfect.

But that ending… Rucka nails it with this dialog between Superman and Batman as Wonder Woman flies off.

In defense of truth and justice by Vita Ayala
Art: Claire Roe

While this felt like an incredibly appropriate situation for Wonder Woman to deal with, it was a bit on the dry side. Which, no pun intended, but any story with King Shark shouldn’t be on the dry side.

It did showcase Diana’s compassion. How she will defend even the worst villains, if they are being wronged. In this case, King Shark didn’t kill the person he was accused of killing. Diana further extended mercy when she saw that all King Shark wanted to do was be left alone.

She gave him that.

The curse and the honor by Michael Moreci
Art: Stephanie Hans

I’m always down for a book with Hans’ gorgeous art. She’s an amazing fit for characters who deal with magic, otherworldliness, and gods and goddesses. I’m a sucker for how much white snow there was and how red Diana’s outfit and cape were. Even if Diana’s red cloak was a bit on the nose when the story led us to a wolf-like creature.

I feel like we haven’t see Diana in Asia very much recently, so it was nice to see her in Japan. Her sparring scene with Kikori was great for insights in both of them, and also Steve Trevor. I like how Diana’s isn’t naive to Steve’s ability to charm.

I applaud Moreci for stepping into this story and showing another side of Diana’s mercy and compassion. Kikori saved his people by taking on a curse. A curse that turns him into a man-wolf creature that would destroy his people. He wants Diana to finish saving them by killing him.

Which she does. The story closes with a beautiful tōrō nagashi scene where Diana honors his sacrifice. This is Diana.

This story lightened the tone of the book considerably. Again, we have Diana’s mercy and compassion, but the tone is completely different from story before it.

Here Diana goes to fight a kaiju. Then she realizes she can communicate with the kaiju. Diana befriends it, gains its trust, and then takes it to the Island of Monsters where it can live in peace.

The story is fun with childlike wonder.

What a great back on Earth resolution. I’ve been reading these issues so slowly because I don’t want Rucka’s time on this book to end. (I’ve also not heard great things from folks I trust about the new issues that have come out beyond his run.)

I really thought Cheetah had paralyzed Veronica. But instead, she just left her with some very nasty scars to match those inside. Doctor Cyber was right that Veronica thought she was being a hero, but she ended up the villain. Though, of course, Steve hugged her regardless.

Oh, Barbara Ann, Diana came through for her friend in a way that she always needed to. Evely does an incredible job at Barbara Ann’s facial expressions while in Cheetah form. Break my heart.

Steve and Diana remain cute, but I don’t trust other writers with this. Same with my beloved queer women of color Etta.

What’s Diana going to do without her lasso of truth? It is so handy.

The golden perfect. This was so damn perfect. (Was that a pun? If it was, it was just for you, Kevin. (Yep, this is a friendship test.))

That said, if I was Wonder Woman, it would be incredibly annoying to have a day where you’re cranky and everyone you work with is like, “hey, what’s wrong.” And you’re like, “shut up, Flash” and then you punch Batman. (Gotta keep them guessing. And no, Wonder Woman didn’t do any of that because she’s a better person than me.)

I imagine that the lasso would keep one in check and honest with oneself. I would completely abuse it to always find my life’s path and certainty. Also to interview world leaders. We’ll see just how much Trump actually “tells it like it is.” I bet not at all.

Anyway, there are lots of abs in these superhero scenes. So many abs. I can wash all my landry on them.

Oh, Etta and Sasha. They all have their different burdens. I hope that Etta finds her Barbara Ann and can actually help her.

I don’t think Cale cares about anything anymore. I’d be surprised if the character didn’t kill herself. (Yep, this review went to a dark place from my earlier jokes.) She has lost most of her assets, her daughter, and her best friend / girlfriend, and she realized she’s the villain.

I’m not sure if Diana has forgiven the gods, but getting her perfect back is some perfectness. I do love the gods as animals.

Also, Steve is like the best boyfriend ever. He’s like “here’s a clean house made for you, also I made you dinner, got you flowers, and now am going to give you orgasms.” Of course, he better be perfect given who he’s dating. Steve does look like 20 years younger without the scruff.

This is just lovely. I will miss this so much. I’m going to go cry now.