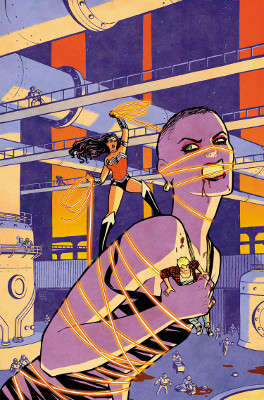 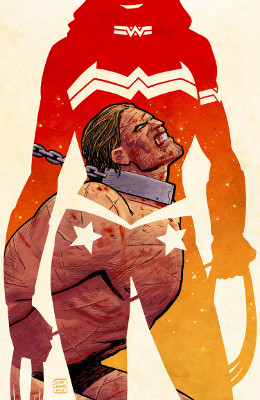 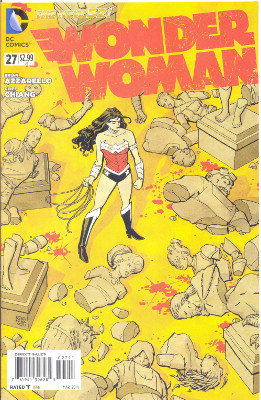 You know, I tend to like these issues where they just all hang out and wait for the next plot points to drop better than anything else. Probably just says Azzarello likes reactive, not proactive heroes, and I don’t like any of his action plots.

I also think another one of Azzarello’s writing issues is that all villains are pretty black-and-white in his tales. With the exception of Hera, who apparently has her excuse of mortality. But if she got her immortality and powers back would be evil in an instant. As Azzarello tries to gray-up his heroes, I want the villains to move into that too. I don’t want Cassandra to be out-and-out evil. She’s getting into literally tying Milan to a railroad track territory. I won’t even get into how much I’m glad that the First Born is torture furniture for Apollo.

Stryfe continues to bore me. Again, another character that relies too much on her mythology and her name to get her personality. Stryfe’s such a weak character that it makes me sad to see her pitted against Wonder Woman as the one to take her down. Or at least give a really good college try. Seems like Diana is smarter than to leave Zola, Zeke, and Hera home with Stryfe in charge.

Glad we’re seeing some reconciliation with Hermes. In other news, Orion remains stupid and pointless.

Yeah, I once again feel that everyone in our heroes group is having plots, emotions, and complex relationships except Wonder Woman. Well, maybe with Zola.

Is the pin supposed to be metaphorical? I guess. Maybe.

At this point, Zola would totally know better than to runaway. She can’t actually think that she and Zeke can survive without super protection. I feel as if Azzarello doesn’t know how to make her grow as a character so she’s just continually doing the same thing over and over.

So Cassandra doesn’t know about Zeke. That might be interesting.

I think I’d like more backstory on how Orion and Milan are such best pals. Seems odd. Sure we knew they were pals beforehand, but we haven’t seen any developments since Orion brought Diana to meet Milan.

Apollo’s torture of the First Born is just boring.

It feels out of character for Zola to trust Dios. Sure, he has some magic powers to get people to like him, but still, she should be wary. Especially when Dios reminds her that they’ve met before.