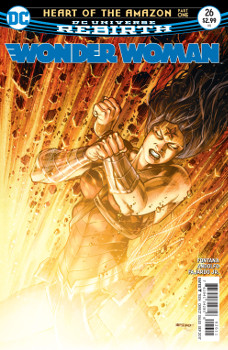 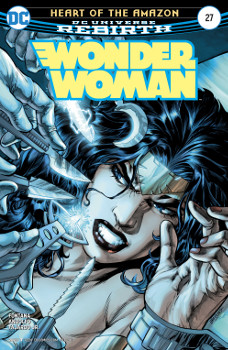 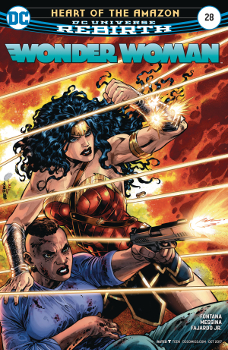 This book was a mix for me. There were two major things that I love, one thing that rubbed me the wrong way, and another that was meh.

To kick off with a love, Andolfo’s art. I adore her Diana. I love how she moves. I love her facial expressions. I adore this sexy and confident Etta. She’s all curves and hotness. And Andolfo’s draws the cutest children.

The second thing I loved was Wonder Woman accompanying Etta to her cousin’s wedding. It felt very much something a best friend would do. I thought Diana’s interactions with the little girl Destiny, who cannot find her shoe, was incredible. Destiny sounds and acts like a child at a wedding where she’s bored and her guardians are otherwise busy. I adored that she immediately knew Diana was Wonder Woman.

What I didn’t like: the book opens with Wonder Woman being a white savior. This is tricky in Wonder Woman books because she is powerful and her mission is to protect women and children, along with bringing a message of love to man’s world. But instead of inclusive — which is the emotion I believe Fontana was aiming for — it felt patronizing, even if the attacker was a white man.

As far as the ‘meh’ — that was the rest of this issue. It just felt boring. And obvious. Dr. Crawford being sick and Diana telling her where she and Etta would be that evening, just obvious.

This is an incredibly dumb plot. Anyone working with Wonder Woman would know that she’d try to help them, even to cure an incurable diseases. Their battle was a mix of a catfight and WWE Divas.

2. Etta Candy — who’s a black lesbian — would not list Friends the most white and straight show in existence as her favorite comedy. Seriously, that garbage couldn’t even put people of color as background characters in NYC!

This books is so hit or miss. It’s all over the place for me.

I liked that Diana considered how she puts Etta in physical danger. I liked how she went through that thought process, but then she ultimately relies on her human friend for backup. Yes, Etta’s recovering, but Etta’s also a highly trained soldier, who’s chosen to put herself into dangerous situations, and overall badass. Which is a bit different than a bomb at a wedding.

The reason the attack on the wedding was so devastating is due to the nature of the event. It was full of people just enjoying life and people from all walks of life. That’s what makes it more upsetting for Diana and Etta than say a battlefield situation.

Though I do not know how the streets of any major city are abandoned enough for this types of assassins hunting Diana.

Messina’s art is great. He knows how to show both Diana’s strength and her compassion and love in how she holds her body. Both Diana and Etta look like grown women here, which I appreciate.