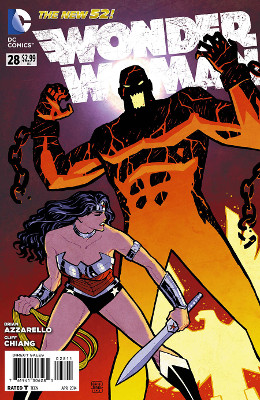 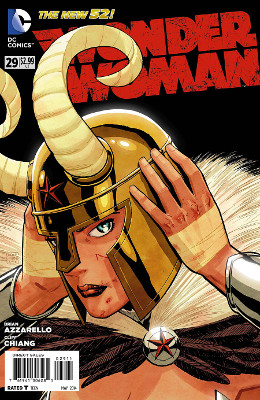 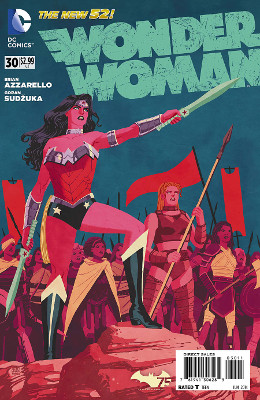 This issue felt like mostly filler. In that, we had a hunt and then a killing/sacrifice/self-destruct button act.

Cassandra’s an incredibly flat villain. She’s bad and evil and that’s it. We don’t really understand her motivations of why she wants to rule and/or tear down Olympus. (We don’t even know which she really wants.) She was cast out for being crazy, but all the gods and demigods seem to be a bit off their rockers, so that’s really just a Tuesday on Mount Olympus.

I don’t understand why Wonder Woman’s scared of Cassandra’s army. Especially when having Artemis and Hermes by her side. Both of which are gods too. The whole thing was weak. So weak I’m kind of hoping that it’s Zola who takes down Cassandra’s evil plans. Whatever they may actually be.

Not really understanding Dios’ motivations in this entire thing. Especially since he did, as Zola pointed out, protect her and Zeke.

The First Born and Apollo’s fight was just boring. Again, we have two more characters who aren’t fleshed out. Whose motivations are very one-sided. Both of them need to get over themselves. Apollo seems to have hit some kind of self-destruct button on Mount Olympus in the child-like “If I can’t have it, no one can!” way. Wouldn’t the other gods not want the First Born to take over?

So I’m glad to see that Azzarello’s changes to the universe — Hera being mortal and the Amazons dying — are reversing, but at the same time, it’s the same old big two editorial stance: that nothing really can change with a character. Right now, I’m holding out that Zeus will be revived and then let everyone know that Diana is not his child. That’s my secret hope anyway.

Damn right the Amazons are the best army out there. Of course, Hera will be lucky if they will fight now that she’s in charge of Olympus. Or after they get rid of the First Born anyway.

Wonder Woman being kind of forced into the role of War God right here. Le sigh. Glad she and Zola made up though.

The whole thing with the First Born being all skeletal/muscles and them clearing standing on the parts of Apollo was super gross. Totally shit that make me not like this book. Oh, right, it’s edgy.

And this book remains edgy for the sake of being edgy. This issue has Cassandra being starved and then forced to eat Apollo’s flesh by the First Born. Of course, he cut it so nicely into a steak-shape. She then vomits it up.

There’s a lot of pacing about whether or not the Amazons will accept Diana their queen and leader, especially since for some reason Hera can’t lift her spell which made Hippolyta clay. There’s also clearly a minion of the First Born sewing dissent in the ranks of the Amazon.

I highly disagree with Azzarello’s assertion that the Amazons not having men on Themyscira is what makes them so retro. I’m adding this to the list of things I do not like about Azzarello’s take on Wonder Woman and things which make it unfeminist. Or at least not about women anymore.

It’s also pretty canon that men have stayed in Themyscira’s guest quarters. Even with Hippolyta reigning as queen.