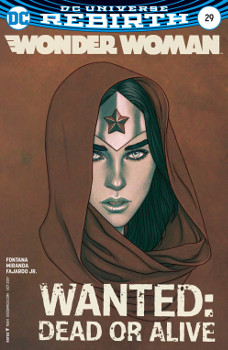 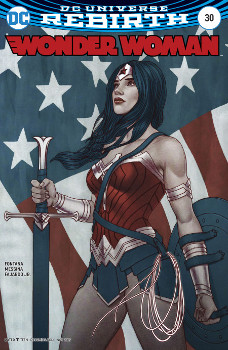 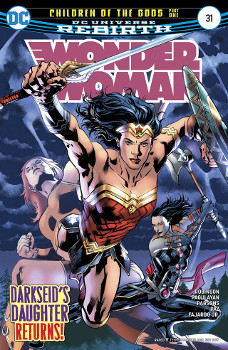 As previously stated, of course, Wonder Woman would go to a doctor who was trying to figure out how to use her DNA to cure diseases. This is completely in character for her, but what it doesn’t guarentee is a compelling narrative.

I can’t talk about how boring I find this plotline without mentioning how I hang on tightly to anything good here. Which the real good is Etta’s and Diana’s friendship. And even though it was a cheesy as hell, I did like them echoing back to each other that they’d never leave the other behind.

There seems to be an attempt to keep with Rucka’s world building here. We have Sasha running their operations. We have Diana and Steve still romantically involved. Diana still cannot return to Themyscira, and she’s wary around the loyalty of her patrons, aka the gods.

Miranda heavily leans on Chris Pine as Steve Trevor in his art. However, not every scene is entirely consistent, and sometimes Steve’s generic square jawed white man, and in others, it’s all Pine.

I did enjoy how Miranda dressed Etta. Someone gets soft butch lesbian fashion.

The bounty hunter fight was so boring because the stakes were so low. Wonder Woman facing off against a bunch of nobodies — except Cheshire — and we all know who is going to win.

And is it ever surprising that an evil corporation has government backing and the military at their disposal? Nope. Though I still don’t understand the bounty hunter angle.

This issue pretty much encapsulates the weaknesses and strengths of Fontana’s run in a single issue. (And that’s not even touching how they can’t keep one artist on the title continuously.)

In the strengths section, we have Diana’s connections to her friends. Steve and Etta have her back. They care enough to follow her into danger, even though it may be over their heads or out of their power levels.

There’s also the scene at the end with Etta, Destiny, Steve, and Diana. Fontana understands how Diana’s strength through love and how she’s more powerful when surrounded by family and friends. Especially as she gathers people around her again after losing access to Themyscira.

In the weaknesses, we have Diana seemingly going in unprepared to confront the conversations and also the battle. Why wouldn’t this doctor guy have loyal super soldiers? Shouldn’t Diana have already thought about how her different physiology could be exploited? You’d think that when she allows herself to be examined by military doctors — who aren’t up to evil — that this would come up causally.

And of course, the lasso of truth solves everything when it comes to the super soldiers. I feel that so many writers use it as a deus ex machina of Wonder Woman comics. Even if those soldiers get a little shady at the end.

Oh, hi, Robinson, you can keep it. Seriously, you open with making Wonder Woman Zeus’ daughter again. Rucka just spent an entire run and several volumes undoing that high level of bullshit. Thanks for that turd on the doorstep.

No one cares about Darkseid or Darkseid’s daughter Grail. Stop trying to make Darkseid happen, DC.

Of course, Hercules lives in rural Oregon. Of course, he’s cutting down logs. Because that’s what every person in rural Oregon does, Robinson. Just like how every British person raises corgis, puts milk in their tea, and personally knows Queen Elizabeth.

Pagulayan opens strong with his art. His Wonder Woman looks like a strong warrior. She looks like she could kick ass, in the same way that Hercules would kick ass.

But Grail is pretty terrible. She appears with gay asymmetrical hair, but it’s less like actual asymmetrical hair and more like an artist drawing a third-hand rendition of what they think asymmetrical hair might look like. And then she’s all sexy and doesn’t look powerful enough to have defeated Hercules.

Grail flat out doesn’t appear capable or dressed for the role. Her outfit doesn’t make any sense. It would literally have to be glued onto her skin in certain places like the collar and around the random stomach cutouts. Cutouts that aren’t consistently colored. I hate this.