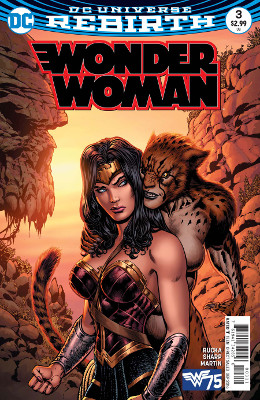 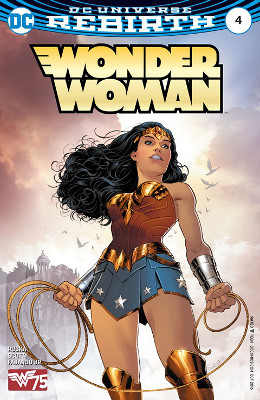 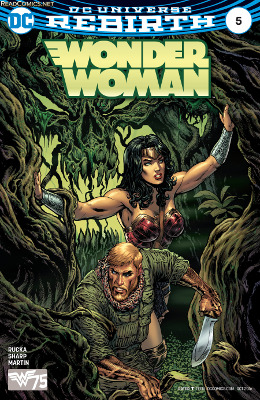 This exchange between Cheetah and Diana has to be one of the best. It illustrates so much of who Diana is. She hasn’t given up on Barbara Ann (Cheetah), the person. She does view her as a sister, in spite of everything. And she extends empathy to Cheetah in one of her weakest and most vulnerable moments.

It helps that Barbara Ann’s abusive ex is a “god” named Urzkartaga. Diana has no problems killing the supernatural. But this scene is actually about one woman supporting another, about lifting each other up in a moment when all seems lost. Of acknowledging that even if Cheetah could walk away (or if she died), Urzkartaga, like most abusers, would just continue to abuse someone new.

This is seriously the Diana I’ve been longing to see for so long.

I even rather like Rucka’s Steve Trevor. I appreciate how he’s both doing what’s right by the women, despite his orders, but he’s also going to be our damsel-in-distress.

Rucka pays perfect homage to Marston’s original. And he does so by layering more tidbits about Amazonian society. I liked that the Amazons took Trevor’s plane, rebuilding it and adding invisibility to make Diana’s Invisible Jet. I liked that they didn’t have guns, and they carefully figured out how to use them. How bullets and bracelets had actual gravity and stakes.

Steve’s comments about how the clothing the Amazons provided him was too big was cute. And helped illustrate just how clueless he was about the consequences of Diana leaving her home. (In that she was originally unable to ever come home.)

Scott’s art remains my favorite. I love how much personality she adds to each of the Amazons. They are all different types of women. Though I’m not sure I’m fond of how she draws Diana’s nose. But that’s a minor detail.

Heavy-handed is how I’d describe the issue. The dialog and the art were heavy-handed and perhaps a little too on the nose. Cadulo being called out by Steve while Cadulo painted Trevor with a penis-shaped plant was the moment that it got too much. I’m not saying Cadulo didn’t deserve his toxic masculinity pointed out, but it was too over-the-top. I suppose now is the time to be direct.

I liked the use of Cheetah here as she relates her own struggles with Urzkartaga to Diana’s current problems with her gods and getting back to Themyscira. Cheetah is right that Diana often puts too much trust in her gods. And they are the ones who control access to Themyscira.

I’m not sure who’s controlling Sasha. Maybe Doctor Psycho? If we’re going for people who are known Wonder Woman villains. But I don’t like Etta getting played this much. Of course, whomever is controlling Sasha just seems to know how Steve and Diana work and can lay effective traps.