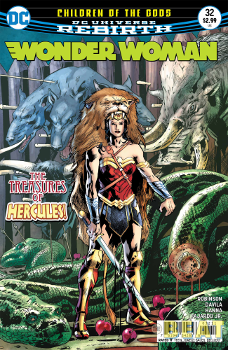 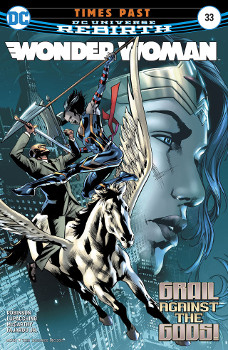 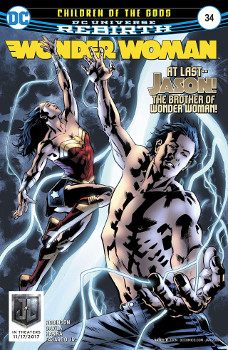 Let’s first talk about what I liked — most of the art. I really enjoyed the styling on Diana’s coats and her hair when clipped back with her tiara. It was fresh feeling, and I’ve read a lot of Wonder Woman comics and seen her in a lot of costumes and street wear.

I do wonder who this Hercule Poirot lawyer exactly is. It makes sense for Diana to trust him completely. That is her nature. But he spends too much time in this book with her in order to not be someone else. My guess is Zeus.

Steve calling Diana “Angel” over and over was incredibly annoying. We get it, Robinson, that’s Steve’s nickname for her because he thought she was an angel when she saved his life on Themyscira. But seriously, where was the editor to take this all out?

Robinson also struggles with how to contrast the masculinity of Steve and him playing second fiddle to Diana.

Of course, this entire plotline — with putting Diana’s “brother” over her own story — causes me pain. No one cares about Jason. No one reads a Wonder Woman book to hear about a man. Only a male writer would believe this was a direction this story should go.

You know what would be awesome? An entire issue of Wonder Woman without Wonder Woman. I mean, she’ll be in the background images on the TV and stuff.

I wish Lupacchino and Davila could agree what Grail’s outfit and hair looked like. Under Lupacchino’s pencils — at the comic’s start — it appears as though Grail’s wearing pants, and I loved that. However, later, we go back to the cut-out look that Davila started in the last book, which screams 1990s.

Speaking of pencils, they also cannot seem to agree on how old Jason is supposed to be. Davila’s Jason looks extremely young, and Lupacchino’s Jason has more years to him. They are both young version, but there’s a difference.

Darkseid is so unredeemable that he doesn’t make for a compelling character. He’s a manipulative psychopath and doesn’t even try to hide it. He is always a jerk at his best, and undeniable evil at his worst. Yawn.

Grail is given little characterization beyond serving her father, and being manipulated by him to some extent. Somehow I don’t really see that being a big plot point.

Twist: he’s in love with Grail.

This is so stupid. Beyond so stupid. It’s also a hate plot that Azzarello already did. Only less inventive. Less new. With added Darkseid.

Jason’s neck is something straight out of 90s pencils. It was so thick and veiny. Ewww.