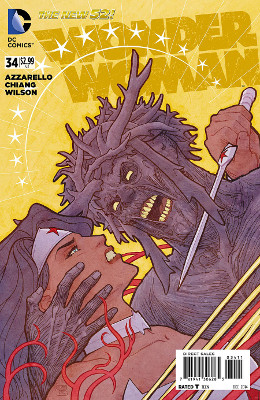 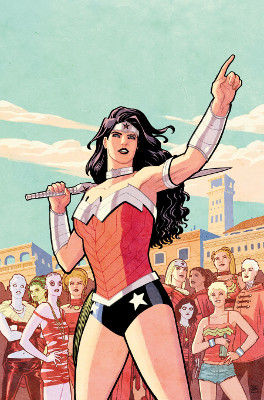 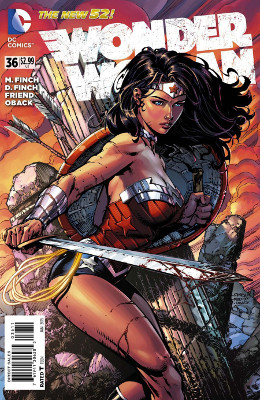 Apparently, everyone can just transport themselves through the blood pools. We have Stryfe doing it and dragging Wonder Woman along. And now Poseidon is joining the gang. I do really love his sea creature form.

So when Zeke turns into Zeus in the next issue, I get to say that I totally called it, right?

I’d hoped that Hippolyta being a golem is a statement that Diana was also actually made out of clay. However, the line about regrets and lying from Hippolyta was clearly showing that it wasn’t. We wouldn’t want to be confused after all.

Even though it was cheeky, I enjoyed Hera pointing out that she turned the baddies into crystal as she has expensive tastes. I was wondering when she was going to whip her magic out again.

Still find this entire thing ridiculous. Especially that they don’t all just team up and pounce on the First Born’s ass.

I feel like I should’ve gotten the twist that Zola was Athena. Especially given she was the major player in the Greek pantheon who was missing from the entire story, and she springs Wonder Woman to even put on her gear. Not to mention her owl hands in the last issue.

However, yep, 100% called it that Zeke was Zeus. Of course, didn’t call the grossness of Zeus having sex with Zola/Athena to birth himself. Thanks, Azzarello. And yes, I do realize that we’re talking about a pantheon of gods who are all related to each other in some way and often times married to each other.

I’m surprised there wasn’t really any type of wrap-up with Hippolyta and the Amazons.

Not sure how I feel about Wonder Woman’s “tough love” to the First Born. Seems like he’s a threat level where she would’ve killed him. So gross that he tried that whole marriage thing again. Even though I do understand about how Wonder Woman loves everyone.

Yeah, can’t say I’m sorry Azzarello’s not on the run anymore. Though I will probably miss the art because it was good and one of the only reasons that I kept reading this book.

Ugh. I had super low expectations for this book, and it failed to live up to those. Seriously, Azzarello had some messed up ideas, but at least he had a strong point of view. Wow, I never thought I’d miss Azzarello.

I wish someone writing this book would understand how to effectively use the Amazons. They’re Wonder Woman’s sisters, and that is pretty fucking cool. I wish they would understand that it’s okay for a hero to have her mother Hippolyta alive. That there can be interesting stories. But no, we must separate Diana even more from the Amazons and make Hippolyta all that much more dead.

I have to agree with Aquaman that it makes no sense for Wonder Woman to go in and just start punching the snot out of Swamp Thing. While I haven’t read a lot of Swamp Thing, I just don’t see him able to take down Diana that much. Nor do I believe that she wouldn’t listen to him at all.

The only thing I kind of even like about this book is Diana and Aquaman being bff. I take it that they bonded over their shared talking to animals powers.