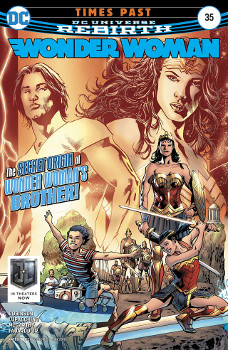 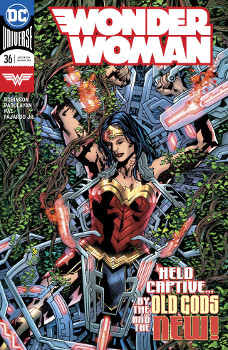 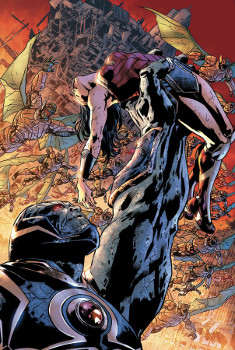 A single star all for Lupacchino’s art. She draws a great Wonder Woman who looks strong and Amazonian. Unfortunately, her art is wasted here with this dreck writing. They seem to have gone back to the Chiang-era New 52 Wonder Woman costume.

If we’re supposed to gain sympathy for Jason here, it didn’t happen. What a generic story. I expected something more, especially as he was trained by Hercules, his rolling into town cool dad. Robinson’s writing isn’t only focused on the wrong subject and offense for a book titled Wonder Woman, but it’s predictable in the worst way. I don’t mind a story I can guess the ending, if it’s entertaining. This is none of the above.

There were so many men this issue. There’s one appearance of Diana. It focuses the entire story on the men and their journey. I don’t identify with any of the men.

I cannot wait until G. Willow Wilson takes over this book in December. I cannot believe they’ve let this book go on and on with Robinson behind the wheel. Seriously, it is at issue #50 now. You cannot tell me sales are good.

I saw a tweet lamenting the lack of Wonder Woman comic books over the last several months. And I was like yes, I feel this joke tweet too.

It hasn’t been two issues, but Jason’s already flip-flopped back (or actually for the first time) think that maybe Grail is bad and Darkseid is worse. Not that this little revelation wasn’t obviously going to happen since Robinson loves Jason so much.

Let’s talk about weird things in this issue:

1. Amanda Waller and Etta Candy, two black women who seem to be interchangeable in how Steve treats them and how they are portrayed.

2. Gigantica emasculates Steve Trevor. Because Steve’s girlfriend can beat him up and who’d want that!?

3. Robinson liked the Justice League movie enough to make the plot part of this book. (Granted, I don’t follow the team-ups books here, so maybe a fight against Darkseid was part of the other books and I missed it.) Still, it seems like a movie shout-out. A movie which did terribly in the box office and critically, especially when compared to Wonder Woman, DC’s only successful movie since 2012, and a film Robinson’s book seems to completely ignore.

4. Grail has no personality.

5. Wonder Woman’s “old face” after having her life force somewhat drained looks like bad old makeup in a movie.

6. I previously called mustachioed lawyer dude as Zeus. Yay, book about a woman where her daddy has to save her. And also he can defeat (by himself) a villain that the entire Justice League worked together to destroy de-age.

Of course, Wonder Woman is fine. Of course, Robinson makes sure to assert that Diana couldn’t have beaten Darkseid on her own. Of course, no one cares if Zeus is dead or alive. Of course, Diana and Jason are now best siblings.

The entire arc was just so DC could make Darkseid powered up again. I hate you, DC.