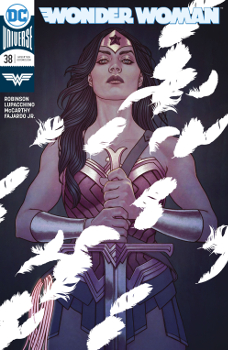 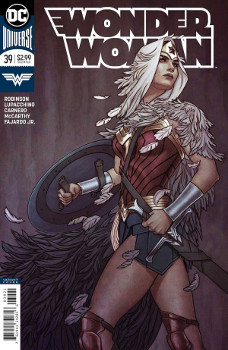 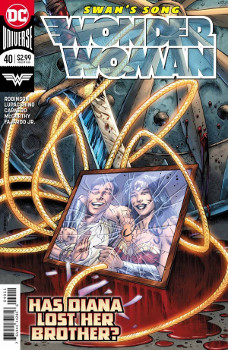 The two stars are for Lupacchino’s art. It’s great. This is some of the best art since Sharp and Scott left the book. It’s also refreshing to have a woman’s gaze on the art. Diana looks strong and capable, like a respected warrior.

Too bad Robinson decided to put ugly word bubbles filled with terrible dialog over the art. Seriously, there are too many words in this issue. And so many of them do nothing.

First, the entire plot with Vanessa (Silver Swan) seems extra ableist. Like it was kind of cool that Diana helped her accept what happened to her, but then she weirdly pushes her toward experimental technology to “fix her.” And then this whole plot is about how broken Vanessa still is. Which is clear given the inner dialog Robinson gives her, which isn’t creative.

Diana then bitches at Jason. Jason, who has the personality of a cardboard cutout in a frat house, one hundred percent deserves it. However, Robinson’s writing is that of a man who thinks he knows how women talk, and he comes off, instead, like those comedians who make their wives the butts of their jokes — their wives who are at home, taking care of the kids, cleaning the house, and work a steady paying job with healthcare, so the comedian can be on stage — and end jokes with “women, you know.”

The murder of that family was pretty gruesome and major for Vanessa’s first crime out of the gate. Even serial killers tend to start with just being cruel to and killing animals.

This plot’s still terrible, but at least the art is great. The fight scenes are well choreographed, and all the ways Diana’s body moves fit perfectly with fighting stances. Though I do always wonder how her hair stays out of her face, especially when there’s a literal wind tornado.

On the writing end, Robinson thinks “savage” is a great word to use to describe people (even if they are white people, let’s not), and he wastes more time on Darkseid and Grail. They are apparently still part of this book and going to make a reappearance at some point. Joy.

Jason remains a moron without a personality. No one thinks anyone is dead from that fall or lightening zap.

One thing that’s been bothering me across the “Swan’s Song” storyline is the font choice for the arc name and the creator credits. It’s pretty unreadable and ridiculously girly. Like someone said, “this book is about girls again, so let’s put some curly q font on it!” And it’s an ugly peach color. Whomever made this layout choice made a bad decision.

While I’m so thankful for Lupacchino’s and Carnero’s pencils, both of whom deserve to do the art on a better Wonder Woman book, this issue continues to suffer from everything we’ve seen in Robinson’s run. The sloppy storytelling. The weirdness of his lack of understanding about how Steve and Diana work together both as teammates and as lovers. The not understanding how women think and feel, exemplified by Vanessa (Silver Swan) and her cardboard villainy. The continued move of the plot to be about Jason and the continued focus on Darkseid.

Here Jason gets kidnapped, but Diana thinks he’s just left in the emo matter he was doing anyway. But you know how I knew he was going to get kidnapped — because the cover loudly declares “Has Diana lost her brother?” And no one thought a fall from the sky and electric shock would kill Jason and Diana who here are demigods with superpowers.

What I really didn’t understand is — why are Steve and the Oddfellows fighting Darkseid’s minions? Like if Diana couldn’t have defeated Darkseid on her own without the entire Justice League… This was a whole plot point! Same with Steve being weaker than Diana… Just goes to show how Robinson views men as able to fight against anyone and anything as default. But women have to be extra special, or go in with an extra special team.

I’m not looking forward to Robinson writing Doctor Psycho. And that ending scene with him was pretty freaking abelist.