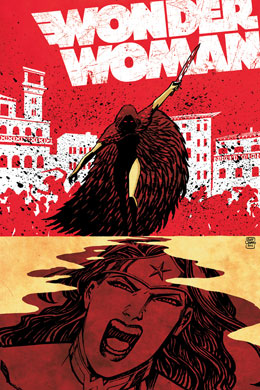 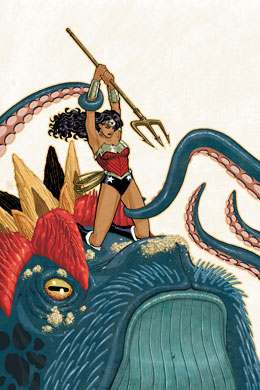 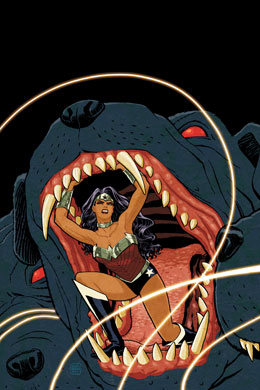 I’m with Wonder Woman about being pissed off about this entire Zeus as her dad thing. I love how Azzarello writes her in this scene. I kind of feel like he’s rifting on Kate Beaton’s Wonder Woman.

I think the brewing plot with the missing Zeus and Apollo who’s gunning to take his power will be interesting. I’m hoping that will play out as less Diana on the search for her dad, and more, Diana looking to stop Apollo. But I’m not placing any bets.

Zola and her smart-ass self continues to be one of my favorite aspects of this story. She, Hermes, and Diana can just sit around and snark. I also like Chiang’s art as an interesting interpretation of Diana and her world. The harsh angles make a nice contrast.

Otherwise, I’m extremely disappointed that Hera has turned all the Amazons to snakes and Hippolyta into stone. I hate Wonder Woman stories that don’t have a healthy mother-daughter relationship or have a dead/otherwise missing Hippolyta. I’d hoped that with the ending of JMS’ “Odessey” that Azzarello wouldn’t use Hippolyta’s death as a motivation for Diana’s anger.

Stryfe is getting a little tiring and a little one-note.

Wasn’t one of the major things that DC was promoting this book on the writing of Azzarello and the art of Chiang together? Yeah, by issue #4, we’ve already lost Chiang. The shiny DCU just seems to be losing the splendor.

That said, I like Akins’ art too. It’s certainly softer than Chiang’s, but I like it. He has a very modern take on drawing Diana’s overall style, and I appreciate that. (Especially when so much of DC’s current art is harkening back to the ’90s. The dream of the ’90s is alive in comic book art apparently.)

I love how Hermes just wears giant kaftans around. Win.

Poseidon and his sea horses are just awesome. I love that Poseidon is not a person, but a giant sea creature. Nice.

The twist at the end with Diana declaring herself a champion of Hera and saying that Hera has claimed the human world was excellent. And hilarious. I’m actually looking forward to the next issue. (As long as we stop harping on Zeus as Wonder Woman’s father.)

Unfortunately, this issue did not live up to the promise of the last issue.

I’m having some serious problems with Akins’ art. First, faces. Wonder Woman’s face is just so large and square. None of Akins’ faces are very attractive. It’s funny in that Hermes, who’s supposed to have a very long face, is the only one who looks kind of normal. This isn’t saying everyone has to be gorgeous, just that not everyone should be ugly.

Also, I’m just not down with Hera being all naked. I mean, Hades isn’t. I guess as a big fish Poseidon is. But seriously, over this.

I’m not understanding Lennox’s motivations with Hades or with Wonder Woman. And I also think that Diana would protect Zola no matter what. Her whole origin is that she was sent as a champion for women and children. Zola definitely fits the bill. And I’m sure there’s a multitude of other ways that Diana could’ve gotten into a fight with Hera instead of biological parent angst.