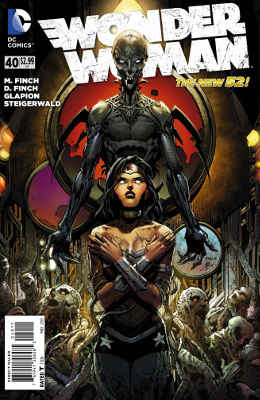 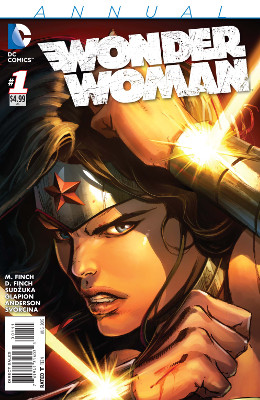 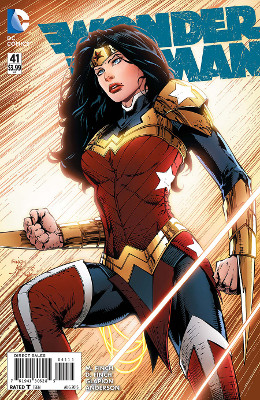 Ugh. This book’s treatment of the Amazons continues to be painful and problematic. Today, they are mass murderers, who just slaughtered a bunch of sitting ducks who are their brothers in the name of anti-progress.

What’s majorly missing from this story: sisterhood, mercy, compassion, and forgiveness. These are all qualities the best Wonder Woman stories have and the worst ones leave to the wayside.

The insect queen’s words would almost be interesting to show the consequences of the First Born. However, there’s too much going on in Themyscira for anyone to care. This could be a good storyline.

Also continually blaming everything on Stryfe and her direct interference is a bit much. And way too focused. Seriously, all the gods were on the run for so long that you’d think they’d be enjoying some r&r.

Instead, we see the Finches tearing down radical feminists (the Amazons) and making them do all the man-hating things and fight each other. Maybe with some oil…

Wow, that was a quick end to Donna Troy and her rebellion amongst the Amazons. Super swift destroying of the stakes within the story. No one wanted to follow Donna once Diana had her in her lasso of truth.

Of course, Donna didn’t say anything — just stopped trying to fight Diana — when she was in the lasso.

I continue not to be a fan of Meredith Finch positioning Donna and Derinoe as radical feminists who kill men, are short-sighted, and would never let a man set foot on Themyscira. Then kill all the men who dare to do so when Diana, who’s currently queen, orders them to let their brothers live on part of it.

Also extremely dislike the theme of “perfection” vs “sisterhood” in how Meredith Finch positions Donna and Diana against each other. While I appreciate and like a Wonder Woman, who attributes the success of Themyscira to sisterhood and the lessons they’ve learned over the years, I can’t help but hate the concept of the “perfect” woman. The Wonder Woman, who can have it all. I’m so tired of “having it all, can she or can’t she?” being a legitimate narrative in women’s lives. No one can have it all, no matter what gender you identify with or don’t identify with. So let’s cut with the bullcrap and false ideals and not have them be the battle cry of stand-ins for radical feminists.

For the Love of a Queen by Meredith Finch
Art: Goran Sudzuka

I wanted to like this story a lot. Yay for putting more actual text behind lesbian relationships among the Amazon, which is very logical when you have an island where only women live there. Yay for Hippolyta and Derinoe being a couple. Though somewhat bullshit that they don’t actually kiss on panel, like this is 1990 or something.

I didn’t even mind their overreaction to fight the Spartans when Hippolyta’s mother, Queen Alcippe, is killed. Even the further banning of men from the island. (Though seriously, there weren’t any there so it’s not like it’s a new rule.) Even Derinoe stopping Hecate from killing Hippolyta was great.

However, what was awful and rather ruined it:

1. No addressing the Amazons’ healing technologies. No one tried to restore Derinoe’s youth, which seemed to be what she wanted.

2. The continued Zeus seduced Hippolyta and thus Diana is born narrative. And Hippolyta hooking up with a man is seen as the ultimate betrayal from Hippolyta to Derinoe. This 100% continues biphobia within the queer community.

3. There was nothing addressing Hippolyta and Derinoe’s actual relationship and how it might change with Derinoe being aged by Hecate. They don’t talk about it. It’s just assume that oh, Derinoe’s old, so Hippolyta dumped her. Which then puts us onto the beauty myth and how women’s only value as lovers is to be young and beautiful. Thanks for that.

What? This was perhaps the best issue so far in the Finches’ Wonder Woman run. I’m crossing my fingers that with some of the plots cleaned up, we can focus going forward.

First, Wonder Woman seems to be a lot more confident in her role as queen, god, and superhero. Like actively talking about it. Even if random villain guy thinks that she’s not fully embracing her War God status. Whatever.

Diana’s moment with Donna wasn’t condescending, and it showed some understanding between the two of them. Also hope that Donna won’t stay forever banished from Themyscira or imprisoned in Olympus. Even if Hera was rather ominous about her recovery.

The second major thing is Wonder Woman’s new look. I love it so much. Yay for full coverage! Yay for actually looking like a warrior! Yay for looking modern! In particular, the version of it on the cover was incredibly strong.

I was a little disturbed by the notes in the back from the Finches about the costume changes. Particularly David Finch saying that Meredith had been bugging him about a costume change for a while and he really didn’t get it or understand how to do it until she drew it for him.

I’m sorry, but you’re drawing a Wonder Woman book. There has been 20 billion articles, think-pieces, histories, and reimaginations of Diana’s costume written and drawn. You know, there’s this thing called Google where you could type this in and learn a ton. Maybe you should get on that, David Finch.

See how this goes with Wonder Woman Vol. 7: War Torn.