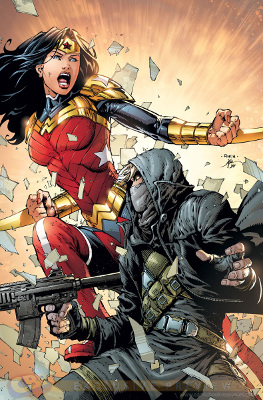 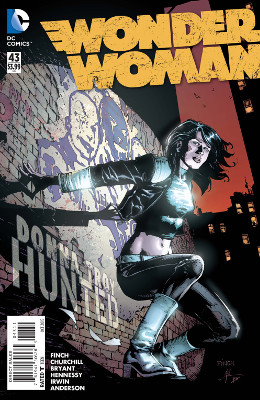 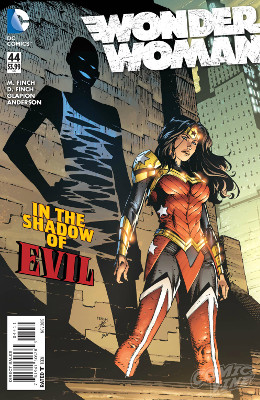 David Finch really needed to learn a bit more about what women wear for a night out on the town. Seriously, both Diana and Hessia appeared to be wearing slips with high heels. Great. In general, the art here seemed really rushed and a bit sloppier than David Finch’s other work in this book. Also not a fan of his take on Stryfe’s form.

Loved seeing Diana offer the homeless man a place to sleep and a warm meal. Very much her.

Aegeus’ plot isn’t particularly unique given the entirety of Azzarello’s run. Though it is good to see that he has some god powers in his blood — plus not-subtle assistance from Stryfe — because I wasn’t believing he could so easily get away from Diana. Even if she’s not going full War God on him.

However, Aegeus did seem to toss his family coin away pretty easily. Why?

Oh, Donna, I’d hoped we were getting your rehabilitation. Still crossing my fingers that she’ll find it in being a hero. And hopefully not try to kill herself.

So on the cover, Donna’s in this pretty great outfit, except the tiny belly shirt (which is actually back in style, but I don’t trust the dudes who drew this cover to know anything about fashion), and then she’s not in the outfit anywhere in the book. In fact, somehow Donna’s back in her super fancy Amazonian armor. I don’t know how that happened. It looks all polished and lovely. Magic.

Anywho, I thought the art might be better in this book, but nope. Looks like no one gave Churchill the drawings of Diana’s new costume in time to get the look right. Seriously, it looks like she has a V across her vagina. And Churchill just has her in all these weird poses: wide-legged stances, wide-legged squats, flying with her legs so tightly together they look skinnier than legs, and lots of lack of feet, which remind me of Rob Liefeld’s twinkle-toes.

Really disappointed that Donna sought out the Fates in order to have them cut her thread. (Though I do wonder who exactly is the keeper of it, if not them. Stryfe seems far too obvious.) Then extra disappointed to see I assume Stryfe be the one to kill them. Also Diana being like “I guess this is nothing, but a bunch of golden thread…oh, almost dead Fates” was the worst. She’s not dumb; she just assumes the best intent in everyone.

Aegeus is really boring me.

And today, we have the plot forwarded by Donna saving a woman from getting beaten. In turn, she does save Donna from being hit by a bus as Donna wonders out onto a London street. However, she doesn’t ever get a name in this issue. Her abuser does. But not her. This is so problematic.

I’d also like to know why Donna’s in a belly shirt in her first clothing not made by Amazons. Especially since M. Finch made all the moves to have Diana not in a bathing suit. It makes me disappointed that Donna doesn’t fully get the same consideration. Donna’s clothes look so dated, even if belly shirts are somewhat back in style.

Happy we got an explanation for the arrow being able to continue to do that much damage to Diana. Though the deux ex machina of a “god killer” arrow really would’ve been helpful when dealing with the First Born, and while I understand and get creative team and direction changes, it was jarring and glaring. Aegeus is becoming more ridiculous.