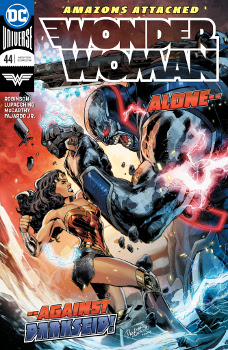 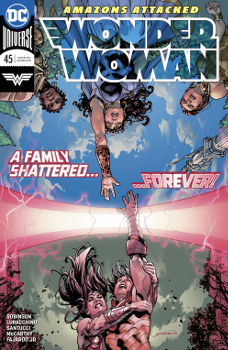 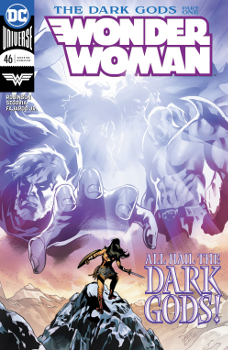 Lupacchino is back on the art, so extra star here.

However, this plot remains Darkseid opens a gate to Themyscira and sends parademons in. Grail tries to attack Diana, and Jason goes to fight Grail. Seriously, nothing else happened.

The good men win! Jason and Zeus’ spirit! They do it! They save the world from Darkseid! Go, men! They do it again!

*We’ll just ignore the entire canonical history of the Amazons being strong advocates for and putting into strong practice restorative justice.

Also unsurprised it was Jason who got to talk to and see Hippolyta, and Diana still missed her mother.

I hope this is all we will see under Robinson’s pen around Veronica and Adrianna. Rucka ended their story beautifully, and Robinson cannot write women.

No one is surprised that Cheetah broke out. I really don’t like phonetic spellings in comics, and Cheetah’s phonetic “cat-like” speech is painful.

Did Darkseid blowing up destroy all the older gods? Or did he just go after the Greek gods last? I don’t know where we are going. But this isn’t surprising.

Seems like someone just wanted an excuse in order to have Supergirl and Wonder Woman fight each other. Girl fight!