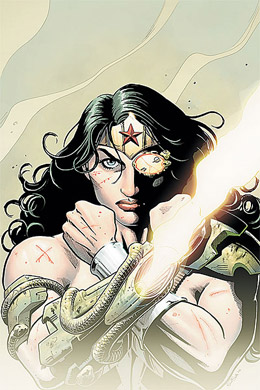 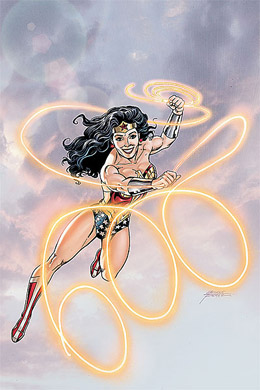 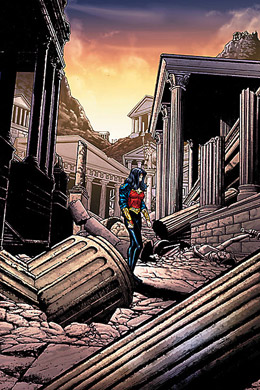 What I like most about this comic is the ending. I love the Amazons coming to the aid of Wonder Woman. I love Hippolyta riding in on her horse, because who better to reconcile the two branches of the family than the matriarch herself. This is what I’ll miss about Simone’s run. Actually, I already miss her.

I found Theana’s backstory tragic, but not moving in the way I think it was supposed to be. I also found her and Wonder Woman’s fight a little anti-climatic. I figured Diana would use her rope, and Zusen turning sides was certainly foreshadowed even before they met Wonder Woman. Astarte killing her own daughter also didn’t surprise me. Simone might’ve tried to rehabilitate Theana if she had more issues.

Steve flying again was great. Though I have to admit that I was sad Etta only got two panels of fighting. I love Achilles riding on Mysia, as always.

I loved seeing the entirety of Washington DC celebrating the Amazons helping save the city. It seemed so classic.

Welcome to a new era of Wonder Woman. Her origin/timeline’s being changed, along with her costume. (Though thankfully something made people start talking about her again. I just wish it was for something better.) Like most anthology-type comics, this is hit-or-miss.

I do think one of my favorite parts is Lynda Carter’s introduction. I love what she says about Wonder Woman, and I feel like those who keep saying, “Who’s Wonder Woman?” need to read it.

Like the comic itself, the variety of pin-ups are also hit-or-miss. My favorites were Adam Hughes’, mostly due to his homage to Wonder Woman being written for young girls, and George Perez’s, as he does a wonderful tribute to Wonder Woman’s history. (Perez’s pin-up is way better than his cover.) The two pin-ups I least liked were the ones by Nicola Scott and Jock. Mostly because I know both artists can do better. Scott’s drawn better Wonder Woman pin-ups in the past, and Jock is a way better artist than this Wonder Woman, who looks more like a bad drag queen. The rest by Ivan Reis, Guillem March, Greg Horn, Francis Manapul, and Shane Davis were rather mediocre. While yes, DC commissioned a few of their big hitters, I feel like if they really wanted to relaunch Wonder Women, they’d have put in all big-hitters and made them do a wonderful job.

The major criticisms of this story was that Simone goes over-the-top with others’ adoration of Wonder Woman. But for me, this works if she’s supposed to be part of the Trinity. Characters all the time fawn over Superman and Batman. I think it’s great that Wonder Woman gets some recognition in the same way. Even Batwoman’s like “wow.”

As specifically a fan of women characters in the DC Universe, this is the first (non-Birds of Prey) major team-up that I could identify almost every character in it. The alien sirens attracting only men gave Simone a good excuse for the all-woman heroics. I love Wonder Woman as the general; maybe general isn’t the correct term, highly respected leader is probably better.

While I haven’t read the ’80s Wonder Woman comics, I did think it was touching that Diana took the time out to go to a graduation for someone in her life.

This team-up works so wonderfully. I want Conner to write and draw both Power Girl and Wonder Woman every single month. This is by far the best story in Wonder Woman #600.

It’s also lovely to see Cassandra Cain show up to help. They are definitely correct that Chang Tsu is rather gross. Makes a giant mess with the giant hole in the ground. This story is masterful because it works well with the size limit. We don’t need to see the entire battle against Chang Tsu.

I love the second part where Kara asks Diana for advice about Stinky. We have a very confident Power Girl, who’s running a business, superheroing, and hanging out with friends. But she can’t figure out why Stinky’s so upset. I love Wonder Woman using her so often not used power to talk with animals.

My favorite part is:

Power Girl: “I hope [Stinky] still loves me.”
Wonder Woman: “He does.”

Awe. I’m such a sucker for stories about kittens. And Power Girl. And Wonder Woman. And stories and art by Amanda Conner.

Simonson’s strongest point is the battle scene itself. She masterfully scripts the action scenes. Both Superman and Wonder Woman are doing exactly what they need to be, and they have an excellent silent partnership on defeating their enemy.

What I didn’t like so much was Diana’s dialog. It seemed stilted. Perhaps a little too formal, which many writers do struggle with. I also didn’t care for how much of this story focused on Superman. It felt just enough out of balance to bother me. This is Wonder Woman #600 after all, and the stories are short ones.

I find it fascinating that Johns takes on the task of starting out Wonder Woman’s newest revamp or reset button. Since becoming co-creative lead at DC, he’s certainly put his finger in a lot of pies. Though I have to say that given his utter love of the Silver Age and the regression of the DC universe back to all those heroes, I don’t think Wonder Woman will stay in this new continuity for long.

Random mystical portal to alternative universes were never my thing. Too hand-wavy mumbo-jumbo.

But at the same time, I feel like Johns doesn’t know who Wonder Woman is. I don’t connect with what he’s trying to tell me about Diana, and I’m not fond of Kolins’ art, particularly Diana’s face.

Instead of launching into Wonder Woman’s costume change right now, I’ll wait until the end of review as the end of #600 is where Jim Lee’s sketch and explanation lives. Though I find it interesting that this story’s called “Couture Shock.” Couture, of course, meaning designer, one-of-kind clothing. Which pretty much says to me that Wonder Woman’s costume, not her new situation, should be the biggest shock of all in this story. And that makes me sad. That also makes me feel okay with giving this story only two She-Hulks.

I want to know what makes Straczynski’s story unique. What makes it a Diana Story. What makes it a couture story. This is not it. I’ve heard this tale before. Heck, other writers have made Diana find herself, and Straczynski himself is currently doing this with Superman and already did it with Thor.

Also if it turns out that Maxwell Lord’s the bad man pictured who’s sent Diana here, I’m going to call shenanigans. Also repeat that I called it here first.

Okay now let’s talk about the outfit change. I’m so glad Wonder Woman finally has pants. I don’t think they’re the best choice of pants for her outfit. In perspective, it’s good to know that Golden Age Wonder Woman started off in culottes, which are shorts made to look like a skirt. Yes, she started her journey wearing long shorts and then was put into a bikini, so perhaps the pants aren’t as revolutionary as they seem. Plus, it seems like Lee was under time pressure and just filled in some pants since there’s no discerning detail on them at all.

I really like the corset. I think it’s the only piece that really calls to her origins. The Amazons put Diana into an American flag costume because they believed that the greatest way to honor the United States was to wear their colors. I like the top details and the belting. Though I’m kind of confused about how her lasso hangs on. That said, this is by far my favorite part of the new outfit.

The boots suffer from any lack of definition as well. They bleed right into the pants. It’s like Lee got bored. I’m glad she’s wearing flats though.

I miss the manacles. But perhaps because I like their Golden Age origin, and that’s the one I like better. I also miss her earrings and I don’t like what Lee’s done with her crown. Kramer does a lot better in the story. The choker came straight out of my closet circa 1995. Bad move there.

Speaking of 1995, the jacket is so ’90s. It really dates what Lee thinks is young. It really dates his designs. The jacket’s almost exactly like what he did with Rogue back in the days of the X-Men.

I don’t hate this tile. I don’t hate Straczynski’s writing. I’m just not sold that Straczynski can do a better job with Wonder Woman than Gail Simone did. (Or Greg Rucka, for that matter.)

As a comic book, Wonder Woman #601 was entertaining. It was well-paced and pretty well-written. I’m just not sure if it was a good Wonder Woman story.

Kramer’s art does a lot to carry the story and express it. I enjoyed his art enough that the things I find distasteful (style and aesthetic-wise) about Wonder Woman’s new costume didn’t bother me. (Or maybe I’ve excepted that this is the way it’s going to be for a while.) The one place Kramer did lose me was during the fighting on Paradise Island. It felt rather cluttered compared to the rest of his more sparse layouts.

The one part I hated about this story was the clown. I’m so freaking scared of them and do not want.

The one part I was disappointed by is the killing of Hippolyta. Can we just stop doing it? I don’t know what layer being an orphan adds to Wonder Woman’s personality.

I did really like Straczynski’s explanation of why this Diana can’t fly and how she will be able to in the future.