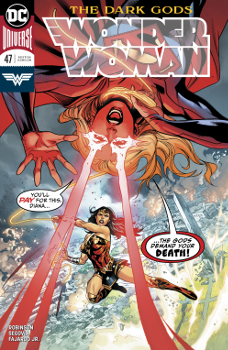 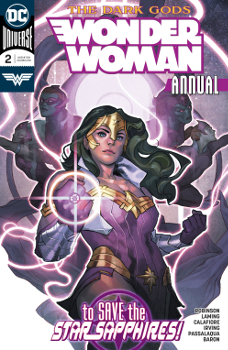 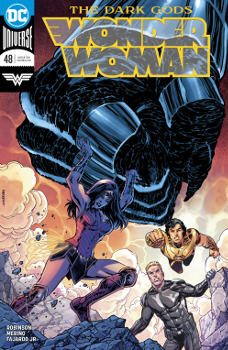 The girlfight ends with Wonder Woman taking down Supergirl.

And we find out that the armor Jason procured was meant to be for Diana, but now it’s forged to his bones, and he cannot give it to his sister. This armor is the only thing that can defeat the Dark Gods, which means Diana was supposed to destroy them, but now Jason will also get this storyline. Peak Robinson.

And Wonder Woman cannot even be in the fight because the Star Sapphires need her. Cannot wait to see how Robinson writes about a society of women.

Oh, what the heck was the point of this entire annual. Except to maybe sell an extra comic for DC this month, and a $5 comic book at that.

Robinson’s books have been verbose, and somehow it doesn’t surprise me when there’s an issue of all women that Robinson writes the least amount of words and he makes the Dark God attacking the Star Sapphires a man. You know, he’s the most chatty of all the characters.

The 74 artists who worked on this book in order to try to get it out the door makes the issue even less coherent. I don’t know who did the art where the Sapphires died, and their lantern was blown up, but it was pretty horrific.

Poor Jason, all alone. The Justice League just got munched on by King Beast (what a name!), and Jason only has Steve in his ear. What will they do next?

Of course, since if you are reading this book, you probably also read the annual, you know Wonder Woman is on her way back from helping the Star Sapphires defeat one of the Dark Gods. Which also means we know we can beat them, even with King Beast on Justice League vitamin shots.

Merino’s art is also not great.