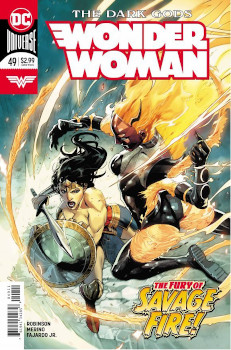 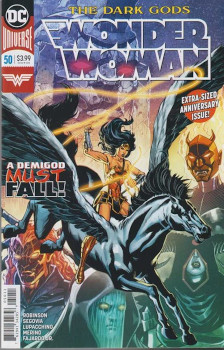 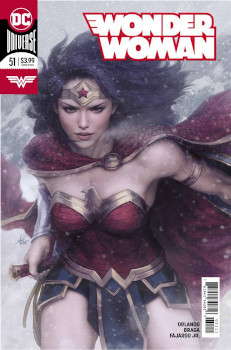 What the heck is up with Wonder Woman’s jugs on the front cover? Normally, I don’t use words like “jugs” to describe boobs, but whomever — Stephen Segovia or Romulo Fajardo Jr. — drew her, those are like jugs. Seriously, there’s no way Wonder Woman could move at any speed without massive boob pain. No support at all. Just boobage barely shoved into her costume’s corset and ramming up against her shield. I’m sure they never get in the way of a battle at all and don’t give her any kind of back pain.

The battles inside were sloppy. If Wonder Woman is truly the only person who can fight the Dark Gods — and Jason has a tiny bit of resistance — that there would be some strategy. But right now, seems like the Dark Gods are dictating everything about this battle, and it’s just chaos. Not chaos in “every battle is hell” kind of way, but writing chaos with Wonder Woman, Steve, and Jason just zipping around the globe.

Not to mention, Robinson tries to show us people dying all around the world due to the Dark Gods’ influence, but then has Diana take an extended break to talk with Steve aboard his airship.

For the love of all things good and fluffy, Robinson’s Steve needs to stop having him call Diana “angel” every other sentence. Robinson is the ruiner of pet names. (The whole reason Steve calls her “angel” is that she saved him when he thought he was dead…)

I cannot wait for Robinson’s run to come to an end next issue. Only one more issue!

I had this weird vision that maybe this book — since 50 is one of these round numbered issues — might contain Robinson’s wrap up and stories by other authors. Nope.

Instead, Robinson has Wonder Woman narrate the final battle and death of Jason from an after the battle point-of-view. She’s the Wikipedia article telling you what went down. I mean, I knew showing, not telling, wasn’t one of Robinson’s strengths, but this was…wow.

On page 10 (counting only pages with an actual story, not ads), there’s a fight scene where Diana’s back is bent, and Jason attacks her with his lightning powers. The lightening appears to disperse over her body like droplets. Droplets of what? I don’t know. But Wonder Woman’s face is in “o” position, and with the addition of it being her twin brother who attacked her, this is just gross.

I hope the next writer doesn’t just let Robinson’s write-off of Steve happen. For no reason, Steve has to go on a “secret mission” and leave Diana to mourn her brother on her own. What? This artificial, contrived Steve is a lousy boyfriend scene is silly. Though Robinson finally heard that no one wanted him to have Steve called Diana “angel” four thousand times every issue.

How freaking refreshing! Seriously, this writer change is the difference between night and day. Orlando understands women better than Robinson, and he understands how Wonder Woman thinks.

Given what’s happening in our country around criminal justice — this is the exact type of story that should be in Wonder Woman. Her books were meant to be relevant to our real world, and frankly, plots like Darkseid and Beast King are incredibly disconnected.

What I loved about this was — while Diana never discussed justice on Themyscira — you can tell the book is referencing it. The Amazons created Reform Island as their “prison” where the women focused on reformation, and in 1940s Wonder Woman, one of her greatest Nazi villains, she did reform.

I’m not shocked that this book states it takes place immediately after issue #28, which was Shea Fontana’s run, removing everything Robinson wrote. But I am kind of shocked that DC editorial let Orlando do this. I hope we continue to have agreed to erase it.

Braga’s art isn’t always my favorite. It reminds me of DC’s cartoon styles. I’m not a huge fan, but it isn’t terrible and doesn’t violate my other sensibilities.

I adore how Diana treats Moon with full compassion and personhood. Of course, Diana can take some more significant risks physically due to her superpowers and Moon being de-powered. But we can learn how to take care of each other in better ways. Though I am surprised Moon was so isolated given how recent studies show how inhumane solitary confinement is — though we don’t ever see what happens when Diana isn’t there.

I loved the ending so much with Diana reiterating that Moon can refer to her by her first name and acknowledging how their relationship has evolved from the first time they met.