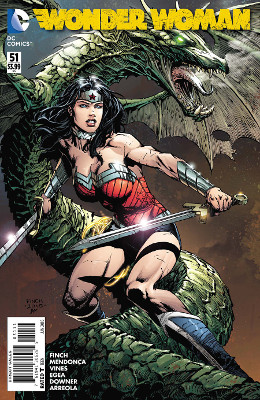 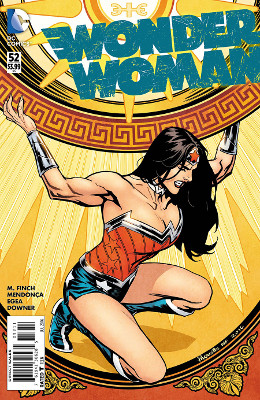 Another reviewer wisely said that in Finch’s Wonder Woman run, Wonder Woman often acts out of character to forward the plot. And here we have a lot of that, justified by Hera’s insistence that Diana was failing because of her strengths.

Yeah, I still don’t believe Diana would’ve believed Hecate. Nor do I think she would’ve let Hera off with the explanation about why Hephaestus has enslaved the Cyclops.

I really hated the scene with Superman. Like there’s been zero establishment in this book about Diana dreaming of marriage and a family. (I didn’t read the romance book.) We readers must assume she wants this because she is a woman. Ignoring the entire fact that she’s an Amazonian and Clark is an alien, and why would either of them be so set on traditions that may not even be part of their cultures. LADIES WANT THE BABIES! AND THE WEDDING! AND GOTTA GET THAT DUDE BEFORE YOU RETIRE FROM SUPERHEROING AND GET FAT. IT’S NOT LIKE DIANA’S OWN MOTHER RAN A COUNTRY AND RAISED A DAUGHTER OR WAS IMMORTAL, OH WAIT.

Why didn’t Diana think to use her lasso of truth earlier?

I don’t know who read these 52 issues and 1) didn’t figure out the Zeke is Zeus, Zeus is Zeke long before it was revealed and 2) didn’t figure that Zeke would “die” so Zeus could be an adult again. No one was surprised.

Okay, Wonder Woman’s whole point is to bring peace to man’s world and save women and children. We already deleted that whole peace thing by making her the god of war. But seriously, you don’t have to convince me that Wonder Woman would sacrifice her own life to save a baby by telling me that she loves Zeke like the child she never had.

All Finch’s Wonder Woman wants to do is have the babies.

That’s all women are good for anyway.

All the women in this book — Hera, Zola, Hecate, Hippolyta, Gia, and even Diana herself — are defined by their relationship with Zeus. This story revolves about Zeus, and Zeus is the only winner of the story.