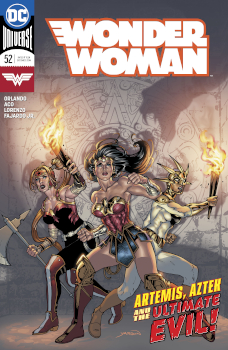 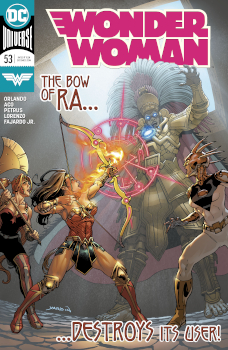 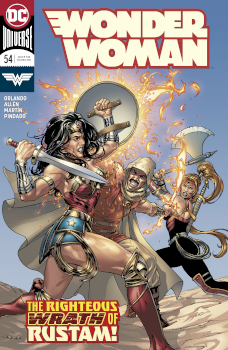 Aco’s layouts are the bomb. Seriously, the way they took Artemis’ terrible 80s/90s hair and made it a design: that’s how you do it. Though I wouldn’t have minded a character costume and look update here.

The Aztec creatures and mythos seemed thoughtful, and as mentioned, the designs were beautifully used. It’s a smart decision by Orlando to use Aztek here, not just have three Amazons pitted against an Aztec god.

The text was clunky. Orlando had a lot to explain about everyone’s backgrounds, and I think he did it in the best possible manner as we had to be introduced to all these characters. Orlando was wise to assume we wouldn’t know Artemis (or this incarnation of her), Aztez, or Atalanta. But the beginning was hampered down by this exposition, and the story only flowed once the action began. Overall, there just wasn’t enough space for all those words and to let the story breathe.

I kind of hope we find something a little juicy about Atalanta.

The problem with this issue is the artist change. While Petrus did a decent job matching Aco’s style, the problem is that Aco does better layouts and understands how to move a battle through the motions. With multiple characters in play, a battle on a comic book page can too often range from messy and confusing on the meh end and boring on the worst end. And I’m sure those layouts take a ton of time to complete as Aco doesn’t leave out the details. Time is always a factor in editorial deciding to bring in a second artist to help finish an issue.

Tezcatlipoca, like most gods, is never as big or bad when broken down in essence. Once the god finally stood bare, the women used the bow of Ra to destroy him. Or at least let the other Aztec gods come into power and change the dynamic.

I did appreciate that they all had to use the bow of Ra together. It made the story feel much more whole and like a Wonder Woman tale. Though I am surprised that Atalanta so easily stood on the sidelines. She may have been tired, but at least how Artemis talked about her, I expected a little bit of a soldier’s pride fuss about remaining in the action.

Is this queen at the end a Bana-Mighdall or an Amazon on Themyscira? Upon my first read, I thought Amazon, but upon my second, Bana-Mighdall.

I’m not sure what I feel about this storyline.

What I did like was the art. Allén’s and Martín’s pencils blended perfectly. I didn’t realize that I was reading a book with two different artists in it. I love how they both draw these strong women. It’s so important to show their muscles and how sturdy they are. They are all warriors, after all.

The desert setting was perfect. All the details were precise and atmospheric. I did love the part where Artemis and Atlanta discuss that they’d be able to walk across this giant desert without worry about dying.

It feels uncomfortable to have three white women convincing Queen Faruka II that she’s in the wrong about attacking their neighboring country. Especially where there’s an evil man — or vague psychopath — who has Faruka’s ear. (Also, I care little for Rustam. Of course, he’s evil; he’s a man trying to assert his will in a Wonder Woman book over women and for war.)

There’s some reprieve as Artemis joins her people, and Atlanta gets locked in jail, so it leaves only Diana — the true outsider — to oppose Faruka. Or try to convince her of the truth about Rustam with the lasso of truth.