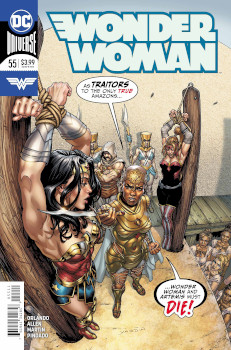 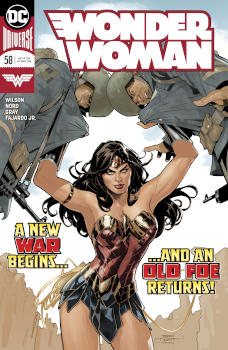 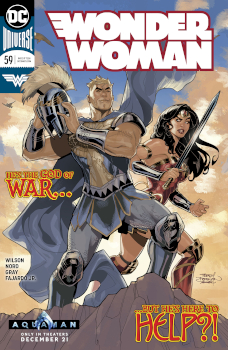 This ending felt weaker because it’s the perfect (the lasso) that solves the story arc. I can see how living in 2019 makes one frustrated — and can’t you just see the truth — and in a book with the lasso of truth, it’s tempting to have it solve everything.

What I do appreciate is Orlando leaning into Diana’s commitment to peace. She wants to stop the escalating conflict. She wants to put an end to Rustam’s lies and his own need for war.

While there are ethical struggles here, and it’s unique to see Diana in a place where the Bana-Mighdall do not consider her a moral superior, this part of the book seemed like somewhat of a letdown. I can’t quite figure out why the pieces don’t fit together. Perhaps the conflict would’ve been more interesting with Rustam, or my raised eyebrow at the white women going against Faruka.

The ending smoothed out some of my feelings about the treatment of Faruka to forward the stories of Atalanta and Artemis.

Since I didn’t read Superwoman, I’m not so sure about this lasso of submission or the golden promise. I wonder how much more of Artemis or Atalanta we will see.

I will not be reviewing either issues #56 or #57. They are part of a DC crossover event, and the thing about being behind and reading single issues is that you don’t know they do this unless you are keeping a closer eye on current storylines. Additionally, the two issues I did read of Wonder Woman did not pique my interest.

I wasn’t as impressed with this opener from Wilson as I’d hoped to be. The story was meh overall, and Nord’s art didn’t capture me.

First, I want to talk about the cover. I don’t know why the Dodsons are always called on to do the covers for books about female heroes when the writer is considered “female-friendly” (regardless of the writer’s gender). I’m not against cheesecake art. However, the Dodsons fall into the camp of too many faces, too similar — especially women’s faces.

Then there’s Nord’s art. In that last panel where Diana stands next to Ares — which yes, she’s supposed to look small compared to the god of war — however, she looks about my size, and I’m a very petite person in build. Diana’s arms look like you could easily snap them in half.

The only art like I did like was Grail. Finally, someone gave her some expressions on her face. Though I see no one can agree on her pants — or if she’s wearing any — still.

For the story itself, I was hoping we were passed everything written by James Robinson. The inclusion of Grail makes me think no. Unless we’re doing a switcheroo with Steve in peril and Diana dealing with those emotions instead of the Jason nonsense, but I worry the Jason nonsense will never end.

Honestly, I hoped bringing back Ares from his imprisonment would mean we’d do something besides have him fight Diana, especially since Robinson had an entire plot about a god who reincarnated himself, and then Diana had to stop him.

Hrm…I’m even less sure what to make of this take on Wonder Woman than I was in the last issue.

Ares wants to help oppressed people, but he also needs to take some philosophy classes or watch The Good Place and realize there’s no ethical consumption. Or there’s no pure living in our interconnected world with governmental and corporate bodies making decisions beyond our control.

But instead, there’s an excuse to have Ares and Diana fight. Okay.

Steve is still alive if captured by a griffin. I appreciated the jokes Wilson made about human men. It helped lighten the tone of an otherwise too serious book. This “boy” seems the most suspicious, and I’m going to bet he’s one of the gods or a different part of Ares.

Nord’s art continues to bother me. Diana remains far too skinny and slight. When the panel viewpoint is from above, Diana’s boobs defy any reality, and after viewing Nord’s non-Wonder Woman art on the internet, this seems to be something he struggles with. Which considering he’s been working in comic books since the early 90s, I have little hope on his art style evolving.