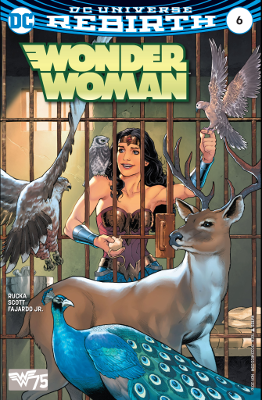 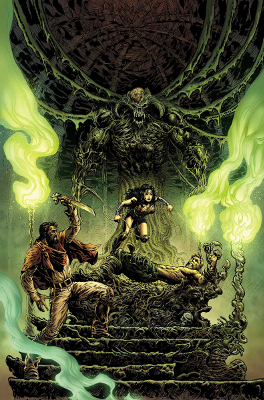 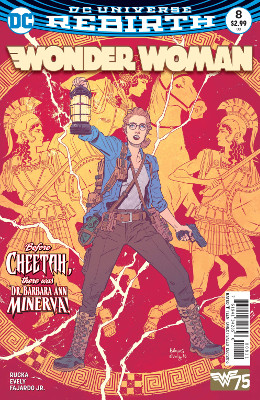 I full expect the US government to take Diana away to study forever now that she ripped the jail cell up. Some gifts!

Rucka does a wonderful job at showing how scared the soldiers are of this mysterious woman, but also how nervous Diana is. Scott also works wonders at making Diana appear naive in her expressions and interactions with the world. And how confused she is because she doesn’t understand their language. How frustrated and alone that makes her feel.

Well until her animal friends, the gods, show up.

Plus, Barbara Ann. No wonder Diana, in the future timeline, feels so affectionate to Barbara Ann and remembers her goodness.

The cameo of George Perez was cute.

Yay for Etta being in both books.

The twist of the girls and Cheetah being Urzkartaga’s wardens was a great one. I loved it. It did seem inconsistent when Cheetah talked about him being surrounded by wives, yet his faithful followers were all dudes. It was a pleasant twist. Same with Urzkartaga being reduced to a flower.

Of course, it’s also likely to give Barbara Ann some nasty PTSD. Though perhaps she’ll be able to get the help she really needs.

Steve being the damsel so classic. Same with him being completely calm and knowing that Diana is coming. Even though he never actually knew that.

Diana tossing her rope to the girls and Cheetah is really key here because they become the saviors. Instead of this being another white savior in Africa story, it is the girls being brave who actually save them. They could’ve run. After all, Steve’s men had cleared the way of Urzkartaga’s men already.

I started off really liking the Year One better than the current timeline. But now, I think I might be changing my opinion. But they’re both good and compliment each other.

Oh, Barbara Ann, she’s a woman who just can’t win. Her mother dies, and her father decides that she’s too imaginative. I’ll never understand why parents try to suppress imagination.

Barbara Ann’s so determined. She gotta be 10 times better than her colleagues, which just means that she barely gets enough evidence of the Amazons and then the foreman steals her phone for his own quest. Which gets him killed, because he’s unworthy.

Though it is her own hubris that Barbara Ann cannot find Themyscira. She’s too quick, and she’s too stubborn to see.

This wasn’t my favorite issue as I’m not sure we needed a detour to tell more of Barbara Ann’s story. I’m thinking that we’re going to be leading up to something huge with her at the ending of Rucka’s first two arcs.