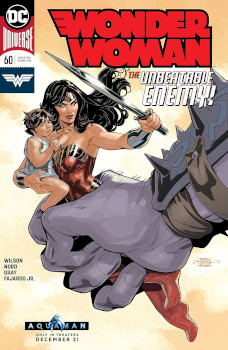 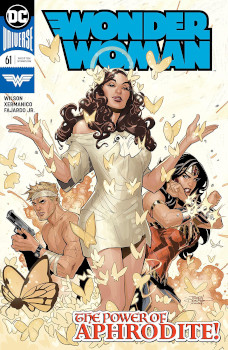 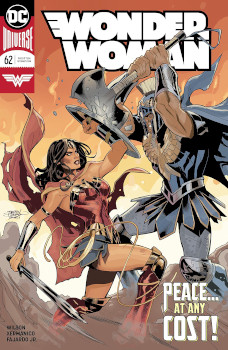 If this turns out all to be a ploy by Aphrodite to get Ares back in her life, it might be worth it. Or something.

While I am still not a fan of Nord’s art, I will give him credit that I love his Aphrodite. She’s the perfect embodiment of devil-may-care sexy of naturally sexy women. I also applaud Wilson’s use of danger after dark in her lands.

I’m glad Etta was wearing her bulletproof vest. I wouldn’t think that Wilson would injure her, and bullets and bracelets is a classic Wonder Woman move.

Ares and Diana’s interactions remain incredibly dull. Like I don’t care so much. I get what Wilson is trying to say about how wars start and how they end and what intervention means, but it’s so clunky.

I’m still finding Wilson’s Wonder Woman a bit too rash in her thinking. She’s punching before thinking, quite a bit, and running into action without consideration. There’s undoubtedly wonky timelines here in how young this version of Diana is. Perhaps I prefer a more considerate and older version.

At least Wilson’s portrayal of Steve and Diana’s relationship is 100% better than Robinson’s. They are like two adults in a relationship, instead of a teen boy writing fanfic about a man he doesn’t like who’s dating the woman he should be with.

I do rather like this ‘don’t give a fuck’ version of Aphrodite. She doesn’t quite know why she’s in the human’s world, instead of on Olympus, and it seems to be connected to Ares, which speaks to deeper issue than just Ares escaping Amazonian prison. Though I don’t quite understand how Diana jumps to the conclusion that this must mean Themyscira has been destroyed or that her mother and her people are in danger.

Also, all the animal characters seem to have been dropped.

I know Diana protects women and children, but those children were rather conveniently well-connected for the plot to move forward.

Xermanico’s pencils are an improvement over Nord’s because at least Diana looks like she has some muscles. I particularly enjoyed the scene where she excitedly hugs Steve just a little too hard.

Ummm…I’m not sure I fully understood what happened with Ares. Besides Aphrodite. Plus, all those animal creatures who captured Steve, they just dropped out of the picture.

There were cute character moments. I appreciated Aphrodite telling Steve not to try to join Diana in her fight against Ares since Ares would kill him outright, and it wouldn’t be a fight. I also liked the moments with Etta and Diana in the hospital. Their friendship and mutual worry about the other worked well. I’m continuing to enjoy Xermanico’s pencils.

But the rest of this: I have no idea what to make of it; though it was refreshing to see a world leader kick superheroes out of their country.

I still don’t understand why Diana thinks Themyscira is in danger, and why this haunts her so badly as if she’s already received a sign that things are bad. Did I miss something?