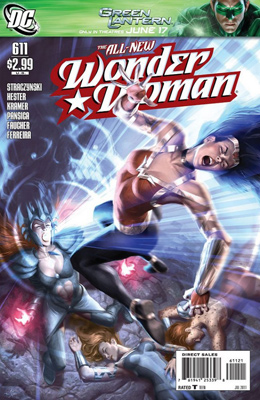 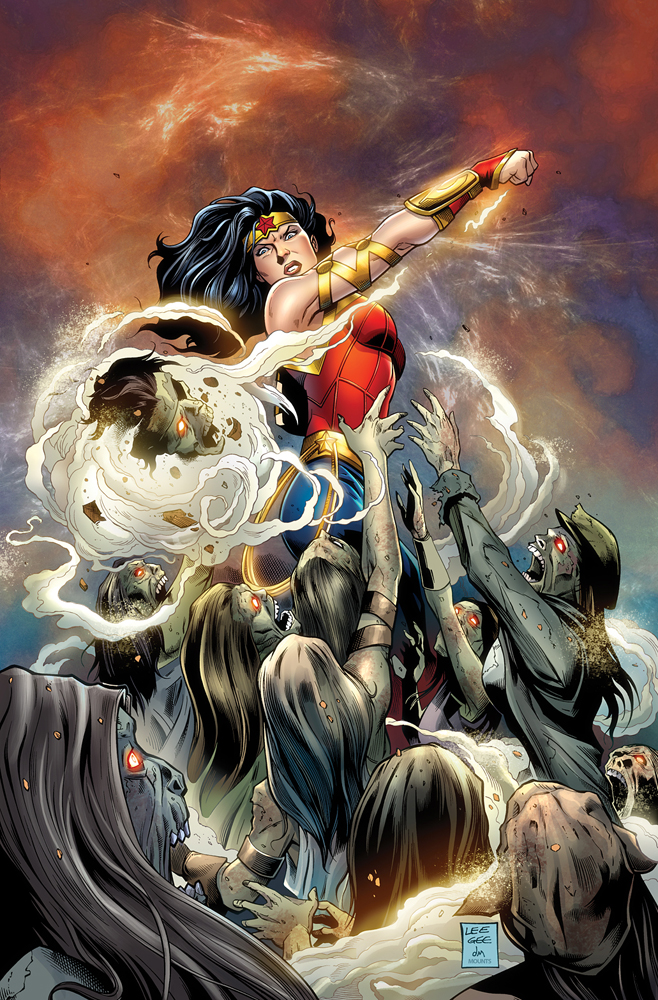 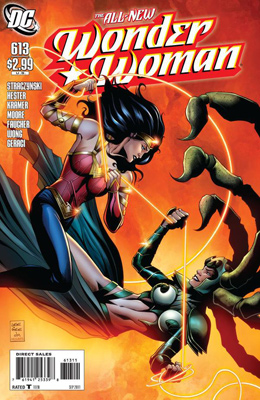 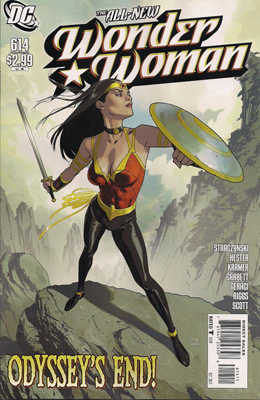 I was super excited when I started reading this book. Mostly that Wonder Woman had teamed up with Cheetah, Giganta, and Artemis to take down the Morrigan sisters. Like yay, Amazon sisterhood team-work.

Then Diana gets all enchanted and all her warrior helpers die. And only Bellona, one of the Morrigan sisters, dies. But she dies at the hands of Ajax and Doctor Psycho, two men. What? Okay, I know she’d been pretty fatally stabbed at that point. Still.

I did dig Diana’s dream sequence as the Morrigan and leading the war-hungry dead. I liked her entire exchange with Kal-El (Superman). It was very much Diana, but with the twisted war-vengeance agenda. Plus, you know it finally answers the question of who would win in battle: Wonder Woman. (Take that the rest of the Trinity.)

However, it did remind me a little too much of Blackest Night. And if I actually read said book, I imagine that it would’ve reminded me even more of it. It’s a little too soon to have a somewhat mindless army of dead people taking war on the Earth. Too soon.

For the big battle, this was kind of anti-climatic as a barely alive Artemis kills the last Morrigan sister and the building explodes. I do love that Galenthias finds Diana and is all snarky. However, Gal’s snarkiness was really underscored by the gods reveal. Yes, I could’ve guess that was them at the very beginning of JMS’ run. Not a big surprise.

While I love how this story wants to showcase Wonder Woman being special because she’s a woman, a human, not because of her godlike superpowers. I can understand that this story is trying to define her personality in a way that’s already been done with both Superman and Batman. But just, yeah, I think any Wonder Woman fan can tell you about Diana more than just that she can fly or punch through a wall. That she embodies the best qualities of humanity.

I don’t need this story to do that for me. Especially when it hasn’t been that well told, and I really feel like if you’re going to tell this story, a coming-of-age tale is just the wrong mode.

I was not impressed with Diana meeting herself as Nemesis at the end. Nor did I buy that the other gods wouldn’t have even tried to defeat Nemesis on their own.

This entire plot felt needlessly convoluted. I feel like anytime people evoke the Greek gods into Wonder Woman stories these days that there’s too much dues ex machina and hand-wavey god stuff. Is that hard to include gods in a plot that isn’t bizarre? JMS said when he started this series that he wanted to get back to Wonder Woman’s roots, and clearly, by that he meant having Wonder Woman go head-to-head with evil gods like Nemesis.

Or somehow I feel like this was all an excuse to have Wonder Woman fight herself. Or to show she’s strong? But the latter, I already know. A better comic book run would’ve pulled in new readers — both those who’ve never read comics and those who don’t read Wonder Woman — but instead, there’s just a giant vague mess that’s hard to follow.

Not to mention that never at any point did I doubt Diana coming out as victor in this fight. Never once did I feel like Diana learned anything on her journey or was impacted by the world change — minus the gratuitous deaths of her mother and all the rest of the Amazons.

*sigh* One comic that I am not sorry is getting yet another reboot.

I’m so with Trina Robbins when she said that this run of Wonder Woman made her hate JMS. The entire Odyssey shows just how much JMS does not get Wonder Woman and her world.

The whole evil pregnancy trope with Nemsis and the dead souls was just gross. Taking that out would’ve improved this entire comic by one star. Just gross.

Not even the Hippolyta and Diana reunion at the end made up for it. And the cryptic “we’re relaunching all our titles” was just dumb. And also made it seem like in a couple years, DC will just revert their titles again.