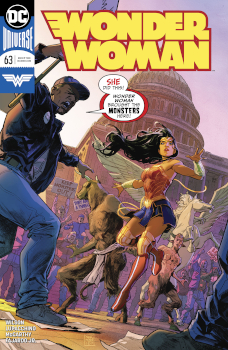 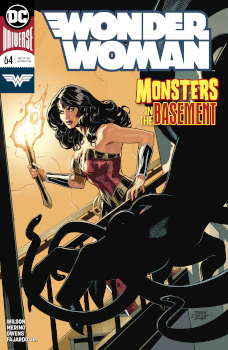 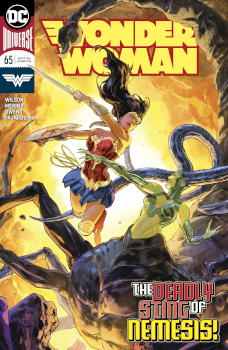 Finally, this was what I was hoping for: art by Lupacchino and a more relevant story from Wilson. Or at least more interesting with some loose beats tied together.

Okay, Cadmus, Damon, and Eirene all came from Themyscira, which is why Diana is worried about her homeland. Again, I could’ve missed this earlier, but her panic seemed unfounded until this moment. Also that these three didn’t go off to wherever Aphrodite and Ares sauntered off to. (Though I’m sure we’ll run into those two again.)

It remains to be seen how this immigration story will pan out. It does show how awful the system is, how terrible some people are, and how some people like Maggie are pretty great. She’s also down for whatever revolution or different life she’s stepped into. Maybe Maggie’s going to pan out to be one of these gods who forgot who she was.

Yay Ferdinand! I hope this means Wilson’s Diana will be a vegetarian. Also, Ferdinand and Eirene are too cute, and Cadmus talking about their unwanted attention from cows was pretty funny. I also liked Cadmus’ response to Maggie questioning the reality of her situation where she’ll get to ride a pegasus.

Though, it does seem to me that there will be some consequences for the three of them breaking out of an immigration building through a window. Not to mention, it seems like their whereabouts were being monitored.

Of course, Veronica has Nemesis chained up in her laundry room. The gods may be out of sorts, but Veronica remembers the score.

Merino’s art is pretty distractingly bad. First, I don’t understand how everyone is dressed normally except Nemesis. Here’s Veronica in her loungewear that looks like something super comfortable I’d wear if trying to look nice on a work-from-home day, but then Nemesis is basically naked. I don’t understand why this skimpy bathing suit for women look sticks no matter the book. It stands out like a floating turd.

Wilson’s Diana remains way too melodramatic for me. I like Diana with emotions — sometimes she’s written too much as the battle-hardened warrior — but here, she’s flopping everywhere. Merino’s exaggerated facial expressions don’t help this. First, she’s ribbing Steve about being injured, and then she’s fighting, and then she’s crying while flying away by herself about the possibility that her mother and Amazon sisters are dead.

Again, Diana takes the word of villains. If Aphrodite, Ares, and Nemesis all ended up on Earth (and those other creatures), doesn’t it seem like perhaps others would’ve escaped? Diana believes a lot without actual concrete proof. I also want to see her and Steve deal with the bad stuff, not just the good stuff or harrowing battles.

I do like the playing of PR here. Of course, there are certain things that Diana cannot do in front of a camera as it will look bad. At least, Veronica using that angle works as something realistic and like something she’d do.

I loved Diana’s resolution with Veronica. The scene where she confronts her and lets Veronica know that Nemesis’ bite controls her worked so well. The writing and the art perfectly conveyed all the emotions and how Veronica only wants her daughter back.

Nemesis’ bikini design was somewhat pulled back. At least, she was slightly scarier and more insect-like instead of a generic “sexy” goddess. The details of the photos in the cave were incredibly effective in conveying tone.

As much as I’m glad Aphrodite is joining Diana in search for Themyscira and Olympus, I do think a bit more relationship resolution with Steve was needed. And what kind of magic did Aphrodite use on him? I have some questions here. Merino does need to figure out what to do with Aphrodite’s hair.