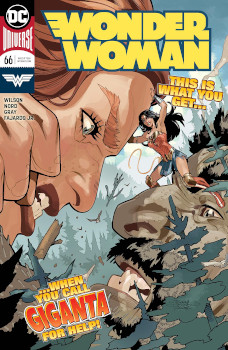 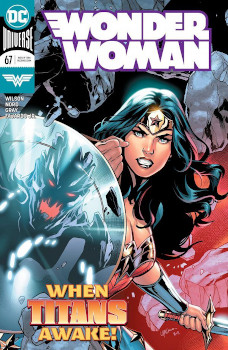 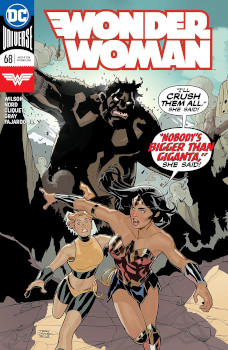 Nord does love his waifish women. Though I am glad that he put Aphrodite in pants, then everyone on the ground won’t be automatically upskirting her.

I’m unsure how I feel about Damon and Maggie hooking up. At least, Damon’s body language tells us that he really wants to get it with Maggie. Also, what happened to Ferdinand?

Titans are rather boring. I wish there were something more concrete happening here. The Titans don’t seem like the type of being who will be giving out answers. Also, I thought they were all dead? See, Diana should have more faith that her family’s not dead.

Giganta’s snark about having a job and a mortgage to pay was chef’s kiss delightful. One does wonder how Diana has the money to afford her very nice house. Of course, since she can fly, she can live wherever she wants and in a cheaper real estate market. Considering they’re fighting Titans, Giganta’s money asks may still be too low.

Owing Amanda Waller a favor is going to come back and bite Diana.

As much as I am not a fan of Nord’s pencils in general, I do like how he draws the Titans, or the creatures pretending to be Titans. There’s enough of a dimension to suggest their form, but they aren’t overly detailed to be rock people. Rocks are organic shapes, and sometimes artists can get too complicated in their lines, and rock creatures end up looking like robots.

I also appreciate Giganta’s smart, simple outfit. It looks like it would adjust to her size and more like modern athletic gear than a costume.

The snark from Giganta to Diana wasn’t as sharp here as in the last issue. Perhaps because there’s more fighting. It seemed late in the story and odd pacing for Giganta’s endnote of the “Titan,” saying it had to protect the sword.

Of course, it was placed there to have Maggie dive into a lake and pull out a sword. We know what that means. However, it does remain to be seen how this will tie back into the more significant search for whatever happened to Olympus and Themyscira.

I still find Damon and Maggie hooking up creepy.

Completely muddled storytelling here. The main point seemed to be Giganta egging on Diana that she doesn’t use her full power. That because Diana has the power of the gods, she doesn’t actually need help in battle and worries too much about hurting people and holds back. The case-in-point being that Diana easily destroyed the “Titans” when she discovered they weren’t living creatures.

I did like the bit about Maggie finding Antiope’s sword. This means Diana is going to be less emo about her mother and all her Amazon sisters dying. Plus, this certainly signals that there’s more to Maggie than meets the eye.

I’m a fan of not seeing Damon and Maggie hooking up on-page.

The other bit I enjoyed was Aphrodite completely disappearing when they were in trouble, and she wasn’t going to help.

But in general, mush. The two artists didn’t help either.