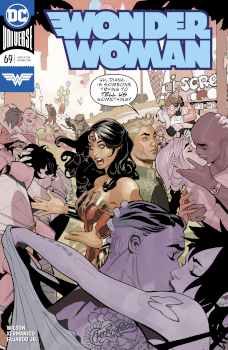 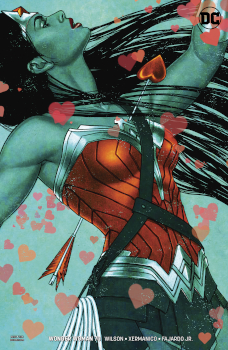 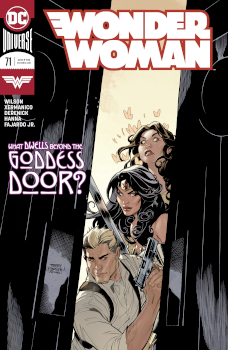 I could rather get on board with a book about these characters traveling from town-to-town and either collecting or stopping Greek gods and other magical creatures from wreaking havoc on small towns everywhere. Though I wonder what happened to Aphrodite’s pants. Our new artist seems to have forgotten about them, and I’m slightly worried about upskirts while she’s on her flying horse.

It’ll be a curious balance to see where Wilson goes with Atlantiades, who maybe is one of history’s first intersex characters especially since they seemed to have launched hedonism onto this town.

The husband freaking out about how he had to take care of his children was pretty hilarious. Looking at this writing now, it reminds me of a specific flavor of pandemic Twitter, which I think of as “oh, these heterosexual men have just discovered that they have children and that children are a lot of work now that they cannot run away.”

Aphrodite controlling the cupids was pretty great. I’m always a fan of the cutesie characters, like cupids and fairies, turning out to be wicked and dangerous. Maggie called them “creepy attack-babies” was the best.

Cadmus and Maggie’s talk about her and Damon…yikes. Though good on Cadmus for calling her out on acting weird about different species hooking up with each other when she was romancing a satyr herself.

I have mixed feelings about the layout choices of sexy bodies to frame the panels.

On the one hand, I continue to enjoy this issue more than previous Wilson ones. Xermanico’s art remains a delight, especially as their layouts fit the tone and assist in the story’s flow. All the details and decorations around the community felt very Grecian, which added to the flare.

I do think my favorite part was when Aphrodite and Maggie go into Atlantiades’ throne room/house, and they find their empty corner. Such sadness, but yes, as Atlantiades says, “The hidden face of desire is fear.” Which I loved this take a lot: What if what you desire rejects you? What if it doesn’t work out?

Also, Aphrodite’s words about how she failed her child were beautiful. I think a lot of parents with “different” children, even ones who are proud of them, sometimes poorly shield them from the world when they’re younger, or fail to help them in the world. This is a beautiful reflection on motherhood.

We have the same angry man who has to take care of his children. His new girlfriend has done his worst fear; she left him because she did not want to have any children or take care of them. (Also, no doubt this guy would make the new lady take care of the babies.)

As the angry people — who blame Atlantiades for destroying their lives — gather, you do wonder if they are justified or if this is fear? Fear of Atlantiades. Fear from how living their desire has “ruined” their lives.

It seems like Wilson is going to be wrapping up this plot very soon. At least, I didn’t expect the empty space in Atlantiades’ home to lead them to Olympus, or whatever this halfway place with a giant colossus minotaur is.

Atlantiades hitting on Diana does remain my favorite thing, even if they look alike. This seems to be done on purpose as one of Wonder Woman’s original gifts was beauty from Aphrodite. If Atlantiades is Aphrodite’s most beautiful child, this makes sense as an artistic choice.

This is a good solution for crowd control. The evolution of Atlantiades realizing what they must do to take genuine care of their worshippers and that responsibility was lovely. Same with them holding the child’s hand — and the revelation that children are not affected by the gods (these kids are going to be traumatized from the adults) — and helping the child find their parents.

Xermanico’s art continues to be beautiful when dealing with the gods. Fajardo’s colors are a lovely touch as well.