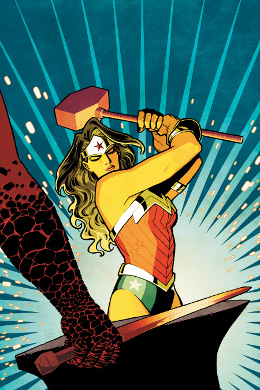 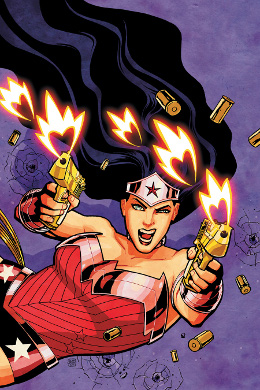 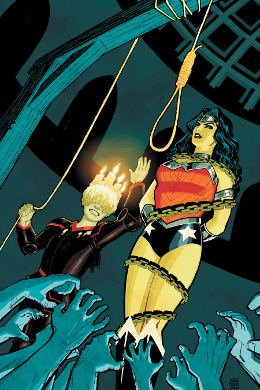 This is still quite the unsettled tale for me. I have to agree with Eros that in so many ways Diana diving deep into the inner politics of the Greek gods seems out of her nature. And only something to come along since Azzarello set up the construct of Zeus being her father.

I did like Eros and his use of guns. And the lovelorn now upset that the love spell worked.

I can’t say that I appreciated the story about the Amazon’s boy children. Ugh. I feel like it’s basically against everything that William Molton Marston set up the Amazons to be about. I did like that Wonder Woman and Lennox would want to free them. And them wanting to stay with Hephaestus was an interesting turn. Not super surprising though.

I do like what Hephaestus said about Wonder Woman making people tell the truth. However, again, that does go directly against the myth of Wonder Woman. I guess I’m just a little tired of people thinking the way to “fix” Wonder Woman is to rewrite her story. I still find it interesting that perhaps the most commercially successful Wonder Woman property was the TV show, which followed those original stories.

I would’ve liked this issue a lot more, except there was that ending. So problematic that Wonder Woman’s been captured to be Hades’ bride. Like I thought the Zeus as father plot was bottom barrel, but this is even worse. I’m hoping this is just something that we’ll see Wonder Woman get out of in the next issue.

Otherwise, I really enjoyed their battle down to hell. Hermes is probably one of my favorite characters in this book. Him being able to kick some ass was pretty enjoyable.

The statues becoming skeletons with muscles was pretty gross. Interesting that in this mythology the dead are just other matter and are able to be anything. (Of course, it doesn’t look like they have a choice in what they want to be or what they can be turned in. Hades seems to be in charge of those decisions.)

I’m pretty glad that Zola’s pregnancy was sped up. This could’ve been quite the long tale. (And I’m so predicting right now that the child is going to be the one to fix the power vacuum. That it’s going to be Zeus reincarnating himself.)

Chiang’s art remains pretty rad, and it definitely brings up the quality of this book.

This plot is just making me vomit. The level of misogyny due to lack of agency of female problems is disgusting. The idea that Diana would submit to being married to Hades, even to save other women, is just not ringing so true with me. Or let herself be killed or hung by her own rope. And Persephone’s fate just adds to the gross.