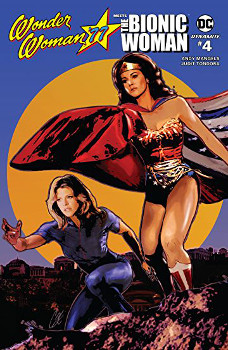 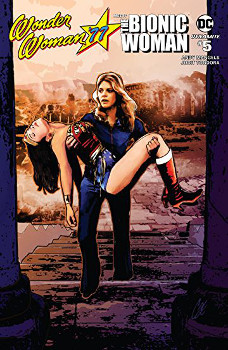 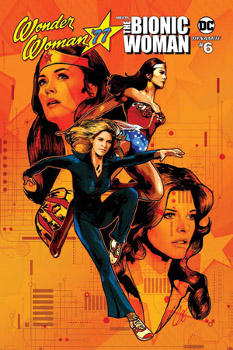 Mangels really attempts to do everything he possibly can in these worlds. We are now in Paradise Island.

I rather love Paradise Island here. I wish we would get more time here. More time for them just to explore and hang out with the Amazons. Getting to know the ladies has been far more interesting than these bad guys who are all running together.

Dru’s face doesn’t look like a young woman/teenager. I mean, I know in the ’70s, the style always made everyone look much, much older.

Max is my favorite.

The “jokes” about Hippolyta just being a step away from “misandry” were just painful. And gross. Did they forget Wonder Woman is a feminist text? They brought down the whole issue. Along with me not caring about our baddies.

This issue also suffers from the everything and the kitchen sink problem. We just had to hurt Wonder Woman in order to show off the healing purple ray. Of course, they are.

The Amazons seem gun shy. Or perhaps sword and arrow shy is the better term here. But they do seem to let the bad guys and the fembots just overwhelm the island because they don’t want to kill women. It isn’t until they find out that those women are fembots that they actually take the attack like an attack.

I did really enjoy Jaime’s Amazon-style armor. It would probably serve her better than her tracksuits when it comes to battle.

I’m not surprised that Doctor Cyber was pretty swiftly taken out of the picture with her dead bionic arm. She is, after all, the other human woman of the villains, and she doesn’t seem to buy into Nazism. Though is certainly enabling it big time.

The ending suffers like the rest of the book has — trying to show off every unique and incredible thing about Jaime’s and Diana’s world and having too much dialog. Oi, the ending for the villains and for the heroes, so much exposition. All the adventure wrap up we needed was Jaime’s and Diana’s goodbyes to each other.

Tondora’s art seemed more cautious here, more thoughtful. Her art may not have been my favorite, but she has a ton of potential.

I liked that the solution to create an EM burst was one that used brains over brawns, even though the Amazons have a lot of the latter.

Nubia was underused. Of course, we needed Donna and Dru in all these fight scenes too.

Max was the only one whose health I was worried about.

It was incredibly uncomfortable and anti-feminist for Dru to insult Doctor Cyber for her looks. Seriously, the woman collaborates with Nazis. There are actual problems with her that Dru could’ve called out.

If they chose to do this match up again, the story needs to be smaller.